The (Vanishing) Snows of Kilimanjaro 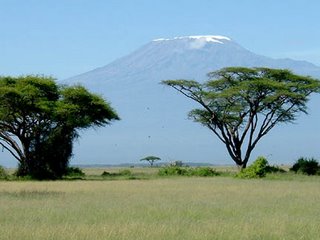 Here is Mt. Kilimanjaro. Yeah, it's in Tanzania. But you get a great view of it from Amboseli National Park in Kenya, where I was a few weeks ago.

The snows of Kilimanjaro are receding and will be gone completely within 15 years. Deforestation? Global warming? A bit of both? Theories abound. But no one argues that it is happening.

I didn't attempt to climb Kilimanjaro any of the three times I breezed by it, in 2001, 2005, or 2006. That's because I'm lazy and I get altitude sickness. I have friends who have done it--as many who have tried and failed as who have succeeded. It's true that a normal person in good shape can climb Kilimanjaro. But it isn't so much the exertion that deters climbers as the alititude-sickness. It's serious business, and does occasionally result in deaths, even on this seemingly innocuous mountain.

My pal Roberta is thinking of trying it. She's in good physical shape. I told her I'd go with her and hike around a bit, but would not try to summit. My ex, Turbo, vomited his way up the last bit (altitude sickness) and Peter Moore didn't make it that far before suffering fever and diarrhoea. It doesn't sound so nice to me. Something like 80 percent of climbers fail to summit.

We decided it might make sense to first try climbing a mountain at home in New Jersey.