My goal was to make a sample map for my publisher. There is to be a map with a trek line in the Dik-Dik book, to show the route I took across Africa in 2001. They had an initial design done by their cartography department.

But I had a slightly different idea, and I wanted there to be little animals and matatus and bananas and whatnot on various spots, along with a dotted trek line instead of a solid one. So I changed their map and put on "borrowed" art that I had on a Zimbabwe postcard and on something my pal Jessica had sent me, to show what I had in mind. It's not quite what I intended. I planned for it to be a lot more intricate, the kind of thing you could really look at for a long time.

The actual map in the book is going to be a lot more "map-like" and not have animals on it. 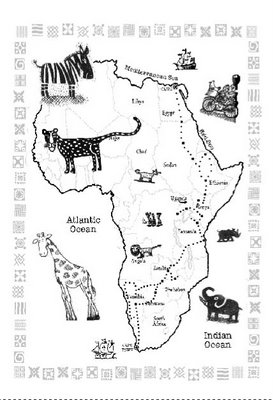