"How hard does that mean?" wondered Roberta. A lot of people had tried to frighten her with tales of not being prepared, physical difficulty, and the scary things out in the wild.

"No problem," I said. "We're fit. And if we can't do this, we have no hope of even trying Kilimanjaro."

The Mt. Tammany trail rises 1,200 feet above Route 80 and the Delaware Water Gap. I've been meaning to go climb it for years now, through three boyfriends. I kept waiting to do it with one of them, and as each relationship dissolved into ludicrous melodrama (two years seems to be the standard expiration date, though the last was not even as much as two months), climbing Mt. Tammany seemed more and more like something I'd end up doing alone. Like most things.

But then Ro had been thinking about Kilimanjaro. And from there, it was easy to convince her to climb Tammany. She wanted to.

During our first seasonal backyard barbecue, we talked about it. And then Michael Kraiger said he'd like to come too. We were rained out for our first departure, but on the second, the day was perfect and cool and bright.

Ro emailed me early. "I've been up since four!"

"Was it the gunshots that woke you? That's what woke me."

It was. Ro lives five houses away from me, and I'm sure the distant gunshots awoke the whole neighborhood. Downtown Jersey City's 8th Street is a far cry from my old street, Avenue B in Manhattan's Alphabet City.

After a minor which-bag crisis, I got out of the house at 6:30. Ro was waiting in front of my house, in her blue VW Golf. We picked up Kraiger, who lives in the Heights, and headed west.

At Dover, we decided to go for breakfast at a diner that Kraiger knew about. (He works in Dover at the Kubert School.) As we drove off the highway, a shiny new SUV in front of us skidded, perhaps on a little gravel, swerved as the driver lost control, then hit a curb and spun over, landing on its roof and crushing the SUV, turning it into a sedan. The SUV slid across Route 15 and halted in front of us.

Ro pulled over and stopped. I called 9-1-1. Kraiger, solid and reliable man that he is, quickly got out of the car and headed over to the scene of the accident. 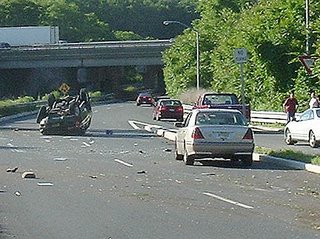 The driver walked over to the side of the road and sat on the guardrail, while Kraiger checked him over for wounds.

This was not an auspicious beginning to our day, but we were undaunted. It was a frightening thing to watch, but scrambled eggs and toast calmed our nerves, though Kraiger discovered he'd gotten glass and a little blood on his hands. We drove on.
Posted by Marie Javins at 9:00 AM

Hope the hippos on Mt Tammany are more relaxed than the ones in Africa.