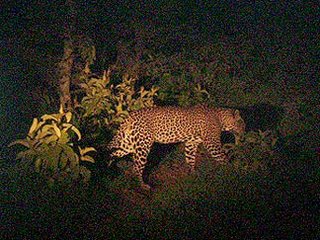 One of the places we went on my most recent trip to Kenya was a private game reserve near Hell's Gate National Park.

Last summer in Uganda, Herr Marlboro and I would often drive around looking for tails hanging out of trees. There was one ranger who excelled at leopard-spotting. We'd see him with tourists, doing his guiding duty. Once we saw him and I wasn't wearing trousers—kind of embarrassing but the context is that H.M had gotten the truck upholstery washed. We'd thought it dry, but it wasn't, and the longer we sat, the soggier our bottoms got. ("Soggy Bottom" is funny to me, a native of the Washington DC metro area, probably not to anyone else.)

We were in the middle of a national park in Uganda—who would see besides a nosy giraffe? I took off my trousers and put them in the sun across the dashboard. When we saw the approaching car, I grabbed them and threw them across my lap. The leopard-spotter probably just chalked it up to H.M.'s Madam being as weird as H.M. was by reputation. We mzungu are considered eccentric.

"Straight ahead, in the trees on the right! You can't miss it—two leopards!"

We'd race ahead—pants or no—and look for the leopards.

We never saw any.

So I was thrilled when we saw a leopard in a tree in Kenya, munching on warthog thigh. As we approached, the leopard climbed down from the tree and vanished.

Another one nested in the crook of a nearby tree, with a bored look on his face.

We took a lot of photos, but I was confused.

What's a private game reserve, anyway? It's got a fence. If they run out of animals, they can buy more. It's like the safari drive at a theme park.

Except what did the Uganda Wildlife Authority do when they wanted a rhino?

Is that so different?

I don't know if it counts in a private game reserve or not. In Samburu, there was a lodge where they put a hunk of meat in a clearing every night. Then the leopard would come and the tourists would snap photos.

It's still a leopard. It just feels like cheating.

Don't ask me for some deep introspection into if it's all right or not. I'm kind of conflicted on the answer. It's a leopard in a tree, all right. That will have to be enough. At least the private game reserve had lovely huts and a nice central lodge. 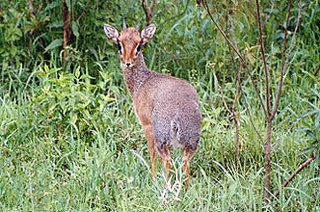 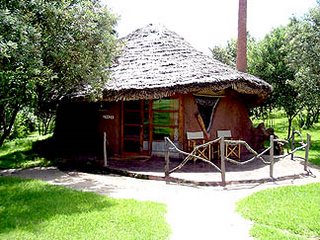 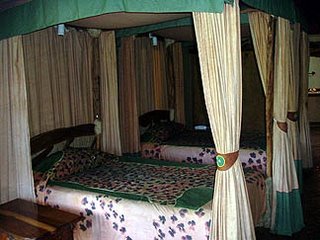 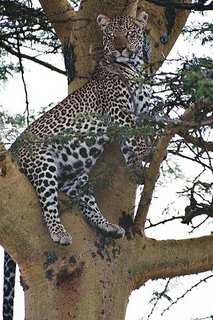 Those are neat photos! Is that a dik-dik?

The top photo is indeed an infamous dik-dik.

Uh, unless dik-diks have gotten a lot more notorious, the top photo is a leopard.

It's the rare, elusive spotted dik-dik.