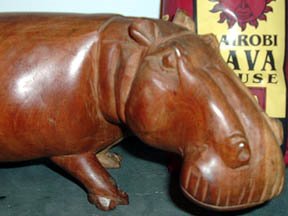 My roommate Julie laughed at me as I packed my bags in Nairobi. I was laughing at me too.

"See this nice camera lens?" I held out my 70-300 Canon lens, the repaired one I'd once cracked against the wall on a Cape Town-bound freighter before famously spending a month trying to get it fixed in South Africa and Namibia. I'd given up and bought a new one in Windhoek. I'd foolishly given the replacement lens to Herr Marlboro right after he had been really mean to me in Uganda. Which is a shame because it was just the right size for throwing at his head, which would have been a more suitable response to his outrageous behavior.

"I'm packing it in my checked baggage. Along with my SLR and my digital point-and-shoot."

I wrapped each piece carefully in articles of clothing.

"Because I need my carry-on room for this cheap wooden hippo." I waved the forearm-sized blond wooden hippo bound for a bookcase in Los Angeles. I'd gone to a lot of trouble over several years to get this hippopotamus, and since hippos hate me, I didn't want to risk letting it out of my sight.

"Are you sure about this?" Julie looked skeptical.

"Yes," I said. "I have bad luck with hippos but my bags have always made it."

I'm pleased to report that the hippo made it to New York with me. The camera lens, camera, point-and-shoot, and a lot of really smelly clothing did not.

I filed a report at the JFK Virgin Atlantic counter.

"At least we won't have to carry our bags home," I said cheerfully to the other passenger whose bag had not shown up.

I supposed it would be a day, two at the most, and then the bag would show up—reeking of Marie-safari-sweat—on my doorstep.

But I didn't reckon with the Curse of the Hippo. I thought I'd kicked it, but it's obviously still with me. My insistence on carrying the hippo in my carry-on meant that my bag was not located for four days. And then it arrived on the fifth day.

Nothing was broken, except for the combination lock. They'd gone through everything, listing the contents because the labels had come off in transit.

"I think I found your bag," the Virgin rep had announced when he called me. "Let me read you the contents: Lonely Planet East Africa, toiletries, clothing, shoes, Canon lens…"

Finally, my bag showed up on a sunny Friday morning in Jersey City. Once again, I was done with Africa. Done with the book, done with the press trip, done with dik-diks, and done with hippos.

I just hope they are done with me.
Posted by Marie Javins at 8:56 PM