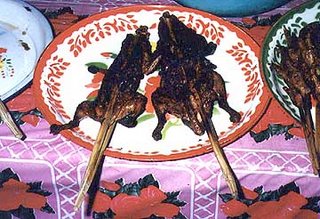 I was looking through some of my old sites yesterday while uploading files (from the coffee shop, because I still don't have internet access at home).

If you put any food on a stick, it becomes funny. But fried rat-on-a-stick is the weirdest food I've ever seen. I asked around when in Laos and was told that it was popular with some of the older or poorer people, but modern, young Laotians were not so fond of it.

What's your favorite strange food you've encountered while traveling? More importantly, can you put it on a stick?
Posted by Marie Javins at 7:04 AM

At Japanese baseball games, festivals, etc. you can get fried squid on a stick. Looks like a flat rat.

I think everything tastes better on a stick. I'm sure rat is no exception. Of course, the stick itself is probably better for you.

Those rats look like they were scraped off Jersey Avenue...

I once was convinced by unscrupulous "friends", at a feast of suckling pig, that the pig's eyeball was a Catalan delicacy reserved for the honored guest of the party. I realized this was not the case when I swallowed it and everyone burst out laughing. Makes a good story, though, so I guess I'm glad I ate it. And I recall seeing pig's ear on a stick somewhere in Spain. It was rubbery (as expected) so I didn't eat more than a bite.