I'm so excited about my new iBook keyboard.

I'd lost the ability to type N and Q in the UAE. To get them working, I repositioned the keyboard in a sketchy way--so it didn't sit quite right but had N and Q--and was typing on borrowed time. I've lost keys and the little scissor mechanisms that keep them in place in the past, and it isn't cheap to replace them one at a time (although a friend sent me a few when he got a new keyboard). I once lost the option key in the middle of a big Photoshop job.

Plus my keyboard was filthy—years of dust from renovating my place, mixed with the sweat from Ugandan and Aussie summers, not to mention Jon Babcock's dead cat's hair, sat just under the keys where I couldn't get to it. Plus, I'd lost the actual letters on lots of keys. The N was completely gone. The E, D, F, and C keys were on their way out. 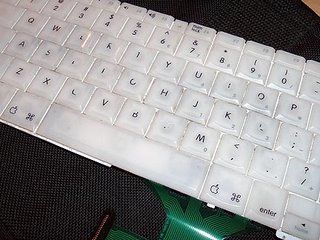 It was time for a new keyboard.

I got one off eBay for $49. My mother forwarded it to me via Aramex, the way Kuwaiti shoppers get around the "will ship to US addresses only" requirement. I just ordered three Wacom tablets for the office this same way.

I brought my Swiss army knife to work and did the surgery under the watchful eye of the webmaster.

"Patience," he reminded me as I nervously took out the Airport card and started trying to force the screws out below. I slowed down.

"Patience," he said again. I slowed down more.

It wasn't totally easy but it was pretty straightforward. The only weird part was when it turned out that the old ribbon cable was glued to the housing. I pried it off slowly because I didn't know if I'd have to put it back in if the new one didn't work.

It's working great! The old one is so disgusting. I didn't realize how gross it was until Mr. Fixit said "Why is it so shiny?"

"That would be four years of fingertip oil, I reckon."

He put it down real fast.

Okay, now I'm looking at my 3.5 year-old keyboard and thinking "what is that grey stuff...how much gunk is under these keys...eeeww."

Glad you worked out the April travel. Barcelona sounds good. I hope it's the right mix of familiar and interesting, so you can get work done but not be totally bored if you hve any free time.