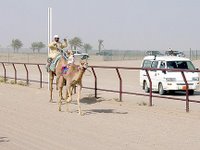 Twelve days left in Kuwait. That means it's time to get things done that I've been meaning to do since I got here.

My list of things I've been meaning to do here is short. I already found the post office, kicked personal distress, earned some money, and figured out the bus system. Aside from book-writing, that only leaves: Camel racing.

The appointed day came. Mr. Fixit was the designated driver, not that designated drivers are required in alcohol-free Kuwait. The morning was dusty, and we probably would have delayed it had not VIP Consultant been over from the States.

VIP Consultant, when he's not assisting Kuwait comic book companies or helping launch important magazines the define generations or some such thing, has some horses. I think he's a breeder. Anyway, he wanted to check out the camel races and he's leaving for home in a few days.

Information was scarce on camel racing, and no matter how many times our young marketing guy kindly tried to call the racing club (he speaks Arabic, I don't), he never got more out of the operator than "1:30."

The camel racing club isn't even on my Kuwait map, but the Lonely Planet Arabian Peninsula guidebook offered these directions: Drive out 6th Ring Road until you see the signs.

That would have worked fine if we hadn't been in the left lane when the Kuwait Camel Racing Club sign suddenly appeared on the right side of the highway. We sped by as VIP Consultant teased Mr. Fixit.

Unfortunately, there were no U-turns for about the next 20 minutes. We ended up somewhere near Iraq, out in the godforsaken desert where there weren't even oilfields. There was only flat desolate sand, with a few tents, some goats, and a chair dotting the landscape.

Okay, we weren't really in Iraq. None of us knew where the hell we were, but that's not surprising since three of the four of us were North Americans, with the fourth being Chinese.

Mr. Fixit had been counting exits (he's very resourceful) and he eventually got us out of the desert and back on the right road. We found the turn-off and went driving into the desert again. Just when I was convinced that we must have missed a vital turn, VIP Consultant said, "There it is."

We parked and went inside. Sven applied sunscreen, only to find that the grandstands were enclosed. (It's Kuwait; of course watching camels race would be enclosed and air-conditioned.)

A nice man in dish-dasha was in charge of a group of westerners. He took us under his wing. He was especially helpful once he saw VIP Consultant's horse breeder identification card and discovered that his name was Larry.

"We have a long history with men named Lawrence here in Arabia," quipped the nice man.

"That's El-Awrance," I muttered, but no one heard. Or cared.

The nice man led us and 30 other westerners out to the track, where we got to watch the camels up close. They were young, muscular camels, just two years old. They came loping down the track. Each camel had a small round robot jockey on his back. The robots seemed to mostly be small whipping machines, as they flicked the crops around on the instructions of men who raced along inside the track in cars. There were also men on camels trailing behind, but they were some kind of referees or owners and were not actually in the race.

He took us past a corrugated steel fence to where one man held a camel while the other unstrapped the "jockey."

We left after a few races. It was interesting and I'm glad we did it, but we were all covered in dust after just a few minutes out in the desert.
Posted by Marie Javins at 10:37 AM

Hi Marie,
You mean your out in Kuwait with Sven Larson and there,s no alcohol to be had anywhere? NNNNNNNOOOOOOOO!!!!!! say it not so. That,s cruel .Just wanted to say hi , stumbled upon the blog. Sounds like another wild adventure. Say hi to Sven . Tell him if he likes ,i,ll mail him booze inside of a minature statue of liberty .Hope all is well.

All the best
Rodney Ramos

Still, it's better than the alternative.

Sorry, I don't know how to post clickable links.