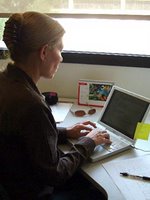 Today I get to visit a Kuwait printing plant, and then later give a coloring class at my job.

Coloring class has been tough going because some people didn't know much about Photoshop, but we've finally advanced past setting up the scan and are moving into flatting.

As for the printer, I hope it is a little more interesting than the time I went to Ohio for a press check, but it probably won't be. At least in Ohio, there were people whose job it was to feed me and get me to the hotel. And in Ohio, I was with Joe Kubert for a press check on his comic series Tor. The printer made Joe and I get up at about 4 in the morning. Joe took it in good humor, but I was kind of bitchy about it.

Update: It was a lot like going to see the printer in Ohio. And the coloring class got postponed until Saturday. 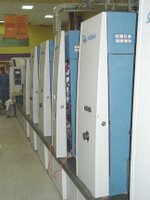