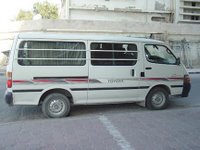 But I can drive in Kuwait.

It's about residency. I'm not trying to be a resident. I'm just a temp, floating through Kuwait as I do through life, not trying to put down roots or fit in. My status here is questionable—not an official employee, not a resident, but certainly not a tourist. I'm a "Visitor." So I'm allowed to use my US driver's license.

The others are all stuck in the red tape of applying for residency.

I haven't tried to learn the rules about residency, because after being here for two-and-a-half months, I'm leaving in 14 days. Until you achieve residency in Kuwait, you just hang around stuck in limbo. Near as I can figure, applying for residency involves staying in the country for a certain number of weeks (an area that Sven keeps blowing it on since he has so many business trips to Europe and New York, poor thing), then being subjected to a battery of medical tests and a huge amount of form filing, which involves getting all the right stamps from all the right people, and filing eight passport-sized photos. Our staff writer has gone on two form-filing expeditions over the last week, only to be thwarted by some sort of elusive stamp both times.

I don't drive here, of course. The maniacal speeding and bad traffic did put me off a bit, but the truth is that I don't drive because it would have cost me $340 to rent a car for a month (KD 100). I'm supposed to be here to earn money, not to increase my grocery-shopping convenience. Plus, I don't mind taking the public bus, though most people do have a weird bus-phobia here. "It's just not done," I've been told. Funny, the hundreds of people I see on the buses don't seem to know that.

The public bus took me to work in the mornings when our offices were near Dasman Palace. Now that we are out in the car wash district, I go to and from work in a mini-van rented by the company. It goes first to Salmiya, picks up Junior Art Guy, Sven, Office Helper, Receptionist (sister of Office Helper), then comes past Bneid Al-Gar to fetch American-Whatever-the-Hell-I-Do AKA me. We swing by CanIndian Staff Writer's in Sharq (where Sven spotted a man walking a pigeon last week), and then head to Al Rai. It takes forever and has a distinctly Groundhog Day feel to it. "Oh, you guys again. Didn't we do this yesterday?" Yes. And the day before that. And the day before that. Sometimes I tease the boys, but I never succeed in making them cry. Other days, they try to goad me into teasing them but I'm too bored to bother, and I just stare out the window while Sven handles any necessary teasing.

Last night, I had the mini-van driver drop me off in Salmiya. The Internet in my building is still broken, so I wanted to use the WiFi at Coffee Bean & Tea Leaf. I took the bus home from there.

And the police stopped the bus.

The policeman berated the bus driver, then started moving down the aisle asking passengers for something. The sweet Indian woman next to me whispered "I.D."

I pulled out my New Jersey driver's license. Slowly. Maybe if I made it inconvenient, he'd get tired of waiting and move on.

The policeman waited. He looked at my license.

He nodded and moved on. I immediately thought how stupid I'd been. There aren't any tourists in Kuwait. And if there were, what the hell would they be doing on the bus going to Bneid Al-Gar?

The policeman checked everyone else's identification and left the bus. As soon as the bus doors closed and we pulled away, my seatmate looked and me and broke into a huge smile.

"Tourist?" She laughed and laughed.
Posted by Marie Javins at 1:26 AM

I picked up my long-stay visa for Belgium the other day and almost had a panic attack. I prefer your state and Turkey was great with its sensible border run 'policy'.