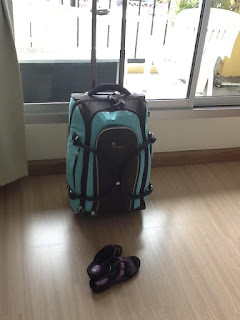 When you fly for free on a frequent flyer ticket, you pay in non-monetary ways.

You have to take what's available, and that might not necessarily be the least painful route, or even the route that makes any sense at all.

Plus, YOU are far more interested in getting the free ticket than anyone is in figuring out how to facilitate your itinerary. Only a few seats are available per flight to free flyers. Some guy in the call center doesn't want to hang out all day looking at weird options you cooked up before you fell asleep last night after learning the normal routes were all unavailable.

My Burma trip was almost impossible to book. I was traveling too close to the holidays, when everything is full. But because of my teaching schedule at SVA, I had to go at the same time as everyone else. This meant all flights were full and nothing was open to me as a free flyer. I worked out a nutty solution where there were still seats, but when I called the call center, I had to try a few times before I finally found someone with the patience and willingness to understand the route I'd pieced together.

My outbound flight was a little weird, but not too painful. I flew the slightly longer way around the world, via Paris to Bangkok to Burma. That was fine, or at least, no worse than anyone else's full transatlantic flight followed by more flying. I had a nice coffee in Paris while waiting. I dumped my winter sweater, had a great muffin and coffee in Bangkok, and headed on to Burma.

What went across the ocean, I wondered. Hmm...there were Tokyo Narita to Canada flights.

I searched in legs. There is no way the website would have automatically come up with the route I ended up with. And I called and walked the guy through it. He laughed, but he put it through. 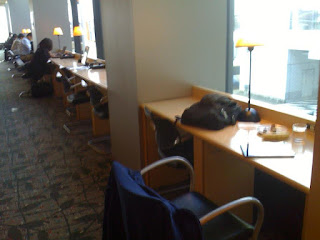 And that is how I ended up flying from Bangkok to Singapore, Singapore to Tokyo Haneda, took a bus across Tokyo to Narita Airport, flew Tokyo to Toronto, then Toronto to Newark, plus I had an 11:40 layover in Tokyo.

It will surprise no one that when I disembarked in Tokyo, a Singapore Air woman was standing at the luggage carousel holding a sign with my name on it.

"It is possible your luggage is not on this flight," she said. "The transfer time was too short in Singapore."

This wasn't really that big a tragedy. I was going home, not on holiday. If my dirty summer clothes didn't arrive in Newark with me in January, it wasn't a big deal.

Except for one thing. I had to get across Tokyo in winter, then home from Newark Airport. I'd have to stand outside to catch a bus on this end. Not for long, but long enough to worry that my fleece was in my checked luggage. The other end wasn't clear. If there was no taxi line, I'd only shiver for a minute, but if there was a line, I'd take the train home and hope there were taxis at Grove Street PATH.

"We have a fleece in the office," said the woman.

She brought me a new navy blue fleece! I had my gloves, at least, and I didn't shiver too badly getting onto a bus at five in the morning.

Wandering around Tokyo for the day was definitely out. But that would be all right. I'd been here a year ago and several times before that. And I had a lounge pass that had come with my credit card.

I spent most of my day at a desk in the United lounge at Narita. Which isn't the worst way to spend a day. And when I finally got on the Air Canada flight to Toronto, the tickling that had started in my throat had developed into a full-blown cold. I bought a paper mill of tissue for the plane and sniffled my way to Canada, where I had to explain to a US immigration guy that I had no luggage.

He sent me back for a stamp, then let me through to fly to Newark. 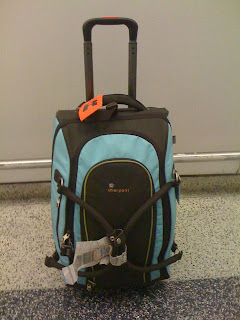 I'd left my hotel in Bangkok at noon on Sunday, which is midnight Saturday night at home. I arrived at Newark at 7:30 PM on Monday. Almost two steady days of travel.

And when I got to Newark, I spent the next two hours going from terminal to terminal, trying to get someone to locate my lost luggage. "They should never have made it United's responsibility. I'm deleting this claim. Go to either Thai Airways or Singapore Airways."

Yikes, wait, no! Shit. I'm not trying to blame you, I just want to know where I can find my bag.

For the record, we have a problem of "I didn't do it, so don't ask me" in this country. In this world. But that's not news.

A nice young woman from Singapore Airlines finally made it her responsibility to walk me around the various luggage transit points until we found my bag, by which point it was pretty late at night.

To hell with the train, I thought. I forked over the $45 bucks for the 15-minute taxi ride home.

"This is a nice part of Jersey City," said the taxi driver with an edge of surprise to his voice.

"I do not like the other parts." He did a kind of shiver. Yeah, yeah, I've heard it before. Unlock your trunk and let me go home and go to sleep.

Free flights aren't really free. But traveling on nutty routes for free is the only way that I can travel as I do. 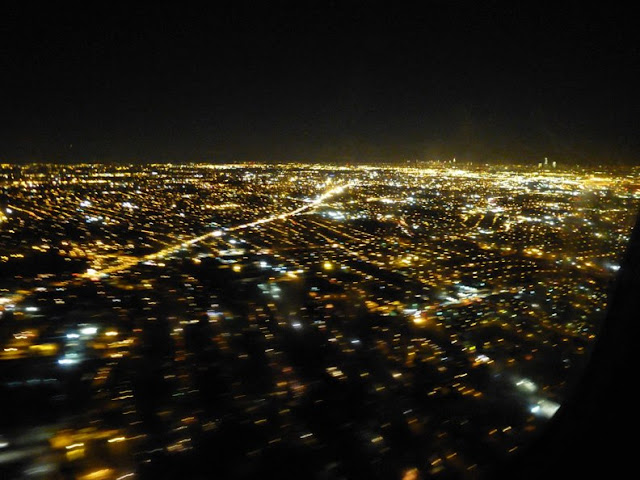 Categories: Bangkok, Burma, Travels with Myself

The other side of this is that frequent flyer tickets let you take crazy routings and stopovers when you actually want to that would never be allowed on a revenue ticket. My January trip involved 18 days in India, 7 days in New Zealand and 24 hours in Tokyo (overall routing IAD-ADD-DEL-BKK-AKL-NRT-JFK), but the cost in miles was the same 80000 as a simple roundtrip to New Zealand. Last January was similar, visiting Australia and Singapore plus 23-hour stops to see friends in London and Manchester for only the 65000 miles required for a roundtrip to Singapore.

I'm impressed by your attention to detail. That's a worthy itinerary--and shows YOU were booking it, not a random person on the phone.

Also a little jealous that you got to take off almost a month.