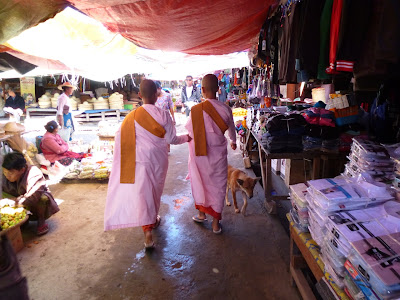 I awoke to the sounds of farts.

I’d been desperate for a hotel room. I shouldn’t complain about my little spot right off the dining room. Teakwood had given me a room when no one else would. Part of me wondered why they thought it would be a good idea to have open windows in bathrooms next to the dining room, and the other part of me chided myself for daring to complain when it was a miracle I had a roof over my head.

It’s like camping, I thought. Next to the latrine.

I went ahead and got out of bed. It was five AM, and that’s when the internet speeds are actually pretty good in Burma. I was able to upload some photos before the power cut out in the whole town of Nyaung Shwe, just after seven. 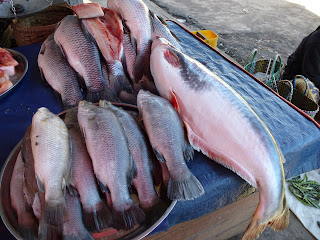 Breakfast here was a few bits of fruit, a pancake or Chinese breakfast or toast and eggs, a plate of local breakfast snacks, and some watery coffee with a teensy cup.

Teakwood had saved my bacon, but I didn’t really want to hang around this place. I finished my breakfast, packed my bag—I had to unzip the expandable compartment to fit in all my new souvenirs—checked out, and headed over to the traditional Burmese massage shop.

I’d gone in on my first day in town and booked a nine AM massage for my last day in town, figuring by then I’d just be wasting time until my afternoon airport taxi. 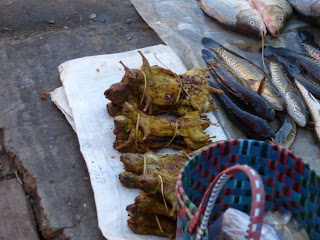 The masseuse was in her early twenties and didn’t look strong enough to pinch and prod me the way she did. Burmese massage turned out to be similar to Thai massage, which I love. But it wasn’t a great massage, though she did her best by walking on me and at one point even stuck her fingers directly into my ears and dug around. I was glad I was the first client of the day.

At the end of the hour (one hour, 7,000 kyat, which was 2,000 more than it had been on December 31st—prices are going up everywhere in town), she said “Okay, finished,” then followed with stern instructions.

“No shower tonight. You cannot relax if you shower.”

There went all the credibility of the local massage. All I could think was maybe this was based in showers involving cold water. That would be bracing.

The market was in between me and the rest of town, so I wandered through, stopping here and there for a chat when I could get someone to talk to me. One souvenir seller told me he had three Germans in his house.

“They couldn’t find a place to stay. And you know, everyone is complaining. In 2009, 2012, rooms were seven dollars a night. Now they’re forty. Many new licensing fees, many problems. Prices have gone up.” 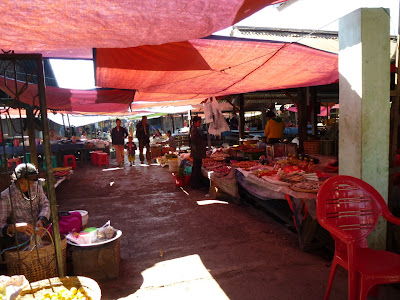 Then there’s supply and demand.

I suggested everyone in town take home one tourist and get paid $20 for it. He thought it was a great idea, but was pretty sure the government wouldn’t approve that.

I walked through town again. The power was back on now. New buildings were going up left and right. All these friendly people seemed to merge seamlessly into the new reality where hundreds of tourists wandered among them. There seemed to be a lack of opportunism, a disinterest in preying to an extent. Rooms were pricey, but people weren’t jumping at tourists fresh off the bus and touting for guesthouses. (Maybe because there aren’t any rooms, admittedly.) We’re still a novelty here, and there’s probably the feeling that this can’t last. But what will this be like in a few years, I wonder?

I had lunch, then headed back to Teakwood to get my bag and take the taxi to the airport. I had only tonight in Mandalay, then would be flying to Bangkok in the morning.
Posted by Marie Javins at 12:30 PM