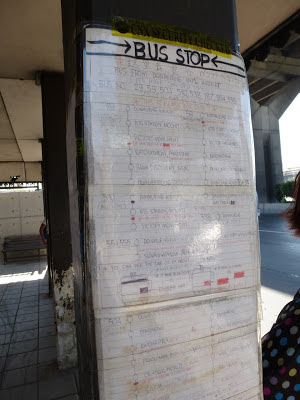 AirAsia left me at Bangkok's old airport. I hadn't been here in years, and was a little startled.

"How do we get to the train station?" A British couple asked me.

"Easy, there's a train stop, and the train goes directly to Hualamphong."

"Say that again so we can ask for the right destination?"

They were sorted. But me? I took a look at the long taxi line and went to the information desk.

"Is there a bus to Khao San Road?" In the old days, there'd been a direct airport bus. There'd been one from the new airport originally too, but when the commuter rail to downtown had been launched, that had been canceled. Which helped a bit, but it was actually tough to hail a taxi at the end of the line at Phaya Thai. I'd sorted out various approaches over the years but the best way to get from the new Bangkok airport to your destination if it's not on the rail line is to fly in on a Sunday morning when there's no traffic, and just get a taxi. 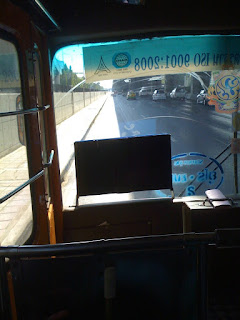 But it wasn't Sunday morning and I was at the old airport, so I followed the information desk clerk's instructions and walked to the right out of the airport, and found a bus stop with a handwritten sign in English. The bus was #59, 23 baht, and it took me to Ratchadamnoen Klang, the big road near Banglamphu.

The bus took forever in traffic, but a taxi would have too.

The receptionist and security guard at Sakul House greeted me like an old friend. Which I was to an extent—I'd lived here a month when the hotel was brand new in 2011. The Thai baht was a lot less favorable to my dollars now and I didn't merit the great deal I'd gotten when the hotel was empty, but still, I was glad to be home. 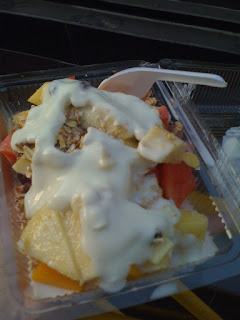 I dropped off my laundry at Cherry Laundry, which I've been doing since my first trip to Bangkok in the year 2000, headed over to the Aeon bank no-fee ATM in the supermarket—which I unfortunately did not learn about until I'd spent loads of money on fee ATMs in 2011—picked up a new SIM from my regular guy in the little mall-like shop near the supermarket, bought oil-free sunscreen and Thai crystal deodorant, tried to find new shoes and a hair clip with no luck, and was surprised to see my regular street food stall closed.

Hmph. I'd have to try them again tomorrow. I went for fruit and muesli instead, right on Khao San Road. Which is why I passed a big hotel and Starbucks in what had been a construction site in 2011 and an old gas station before that.

I headed to my regular mani/pedi place for a mani/pedi and facial, and stopped in a May Kaidee's for a vegetarian dinner. I'd stopped there once before and fled when it seemed everything had soy in it. This trip was even less successful. No more.

Exhausted, I straggled back to Sakul House in the evening. And since my room was in the back of the hotel this time, I was almost disappointed that I couldn't hear the buskers on Soi Rambuttri.

In other words, no Hotel California. Really, I couldn't complain. 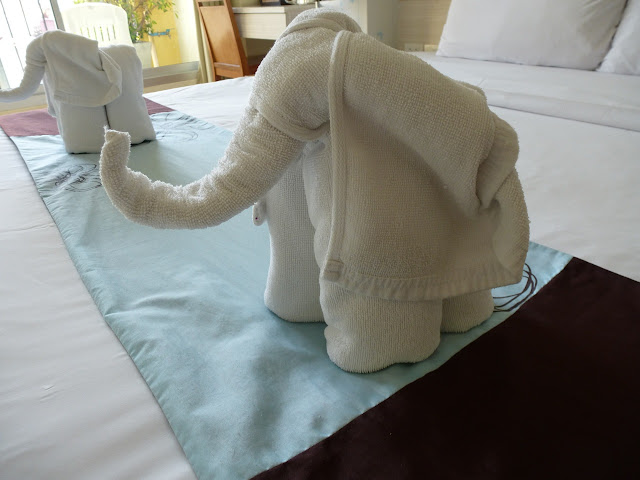 Airport train + Saen Saep boat seems like a reasonable way from the new airport to Khao San to me, better than dealing with taxis and traffic anyway.

I didn't hear Hotel California even once when I was on Khao San Road last week. I felt like I was missing out on the proper Khao San experience.

That's funny--I've stared at the map long enough to have come to the same conclusion about the train to the canal, especially after my nutty attempts to find the best route to the Chinese visa center in 2011. I was of two minds this time, one that I really wanted to try it and two that I didn't especially want to try it while dragging luggage.

It didn't come up since I went to the old airport, but I'd like to give it a try one day. I'm not sure what would be the best stop to try it at. Makkasan looks close but I know the Phayathai area better. I wouldn't try it before the Pratunam area since you have to change boats there.

I didn't hear Hotel California at all this time. I wonder if they're realized it's not actually popular?

I hope you enjoyed your trip!

Thanks; still enjoying it, actually. (Bangkok was a brief stopover between India and New Zealand. I don't get back to NYC until Saturday.)

Makkasan is well east of Pratunam so would require a boat change. I did it at Phayathai in one direction and Pratunam/Rathaprarop in the other; the latter seems slightly preferable.

That's great! So it's not just a theory...it's a reality.

Hope you're having a great trip. Two fantastic destinations in vastly different ways. I swore I'd never go back to India after my first trip there in 1998, but it's really not that bad. That was just new-to-travel Marie talking.