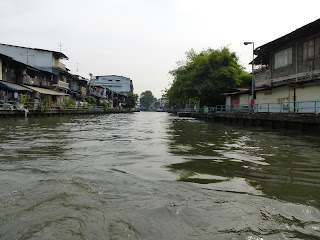 "What do you mean I can't post home my wooden monks from Burma?"

"No Buddha images," said the man at the post office.

"They're monks, not Buddha," I explained.

He shook his head and packed up all my other souvenirs. Fine, I thought, I'll just take them out in my luggage. I paid for my shipping and dropped my little monks off at my hotel. I'd known that could be a problem, but I'd been hoping to get away with it. The good news is that he'd been distracted by my monks and missed my Buddha paintings. So they were safely packed up and sent. 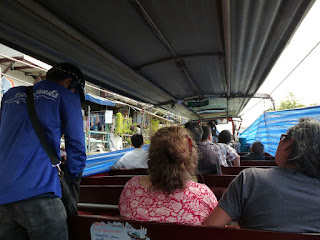 I headed downtown by canal boat and went up to Tan Telecom on the 4th floor of MBK. I had an old iPhone that didn't work, and Tan had fixed me up before for 1,000 baht.

Unfortunately, my iPhone chose that moment to work perfectly.

"What? It can't be working!" The guy stared at me a little mystified.

I stopped in Tokyu department store to try to find shoes. I had some great platform sandals I'd been wearing, which I'd bought last time I'd been in Bangkok to go from Bangkok to Australia to Tahiti to the Marquesas with me, which replaced an identical pair that had taken me all over Asia. Too late, I remembered these sandals had been the old model and I'd had to run all over town to find the last pair last time. 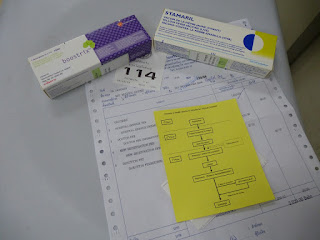 I bought a similar pair in red, and hoped they wouldn't hurt too bad. My new red shoes, mysteriously repaired phone, and I went to the dentist across the street for a quick cleaning, then I headed out to get an updated yellow fever vaccine.

That took forever, and involved the most ridiculous system. See doctor, go downstairs to take a number, pay when number is called, wait for number again to pick up prescription, go to injection center. I should have gone to the Bangkok Christian Hospital which already had my information on file and saved myself half the trouble, but I had been taken in by the travel clinic's website. At least I am probably good on the vaccinations for another decade.

I barely made it to meet Mr. and Mrs. Fixit in time. Readers maybe remember Mr. Fixit works in Kuwait, and the Fixits headed to Cairo when things went sour with an office ownership there. Mrs. Fixit is Thai and the couple own a condo in Bangkok, so they like to come here for holidays. 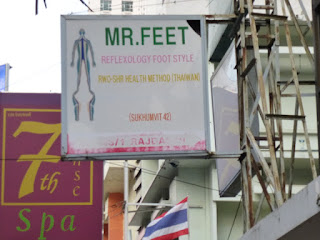 "Oh my god, you're in SHORTS," I said when they walked up. I'd changed into my new shoes to try them out, and I was sleeveless, but it hadn't occurred to me that I wouldn't be the only one in immodest clothing.

I'd never seen him outside of a Muslim country, even though neither of us is from the Middle East. He's from Hong Kong.

The shorts were good though, because we all went for great foot massages at Mr. Feet, near Pratunam, and had fabulous dumplings with a tasty broth in them. Yummmm. 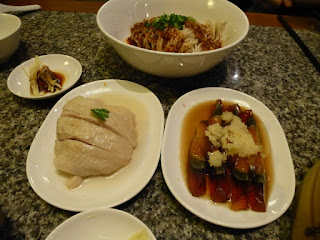 I'd had a long day, and worse, my new shoes were killing me. We looked at Erawan Shrine to try to find ceramic zebras but there were none.

"They clean out the old offerings on New Year's," explained Mrs. Fixit. Ah! That's why I could never find the same shrine twice. They changed. I was finding the same ones, but the offerings didn't stay forever.

I took my leave, changed back into my old shoes, and tried to get a taxi. All I could get in the center were crooked drivers trying to overcharge me, so I took the Skytrain to Victory Monument and hailed a taxi there with no problems. He used the meter without even arguing.

I hope he likes the new shoes I accidentally left him in the back of his taxi. 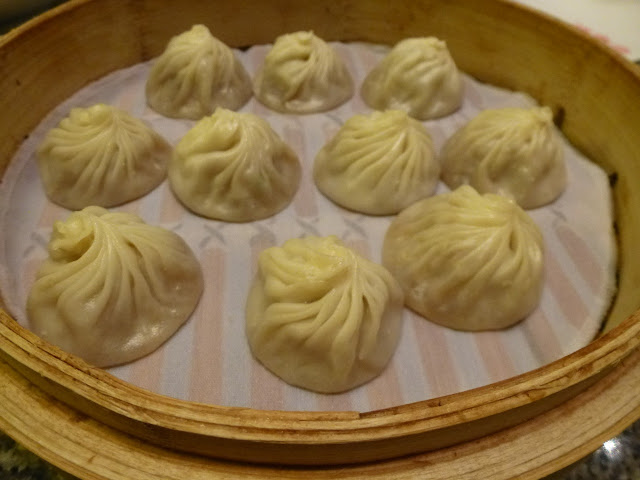 Categories: Bangkok, Travels with Myself