Appreciation for Now and a Eulogy for the Future

I hurried from the boat dock to Teakwood Guesthouse, to check in and see what kind of room I'd ended up with. 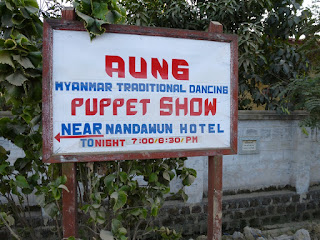 It was fine—a typical upper-end budget traveler room. One thing I didn't like was the bathroom being right off the dining area, with open windows at the top. It actually took me until morning to realize I should shut the bathroom door so I didn't have to be serenaded by a similar toilet across the hall from mine.

I'd read that the proprietor of Teakwood did the hard-sell on the guests—that's true, but her daughter was really sharp, and her husband was kind. I think the owner might just be misunderstood. She's really just a good businessperson. And I'm able to say simply no if I need to. But it was no Amazing Hotel, which was $72 a night to the $50 I was paying here. 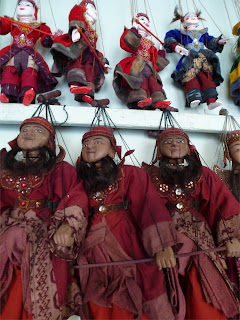 But Teakwood had a room when no one else did, so at the moment, it was paradise.

My bag was waiting for me in my room. I reorganized myself, then headed out. I wanted to see about a puppet show. I'd both read about the local puppet show in Lonely Planet and I'd seen a sign for it—Aung Traditional Puppet Show.

"What time is the puppet show," I asked the woman who came out of the puppet building when her kid saw me and went to fetch her.

"Seven tonight," she said. I bought a ticket.

"How much are those puppets?" I asked, pointing to some marionettes on the wall.

"Ten dollars each," she said. "We make them here."

I decided to give the marionettes some thought, and headed to a restaurant to get some curry before the puppet show. 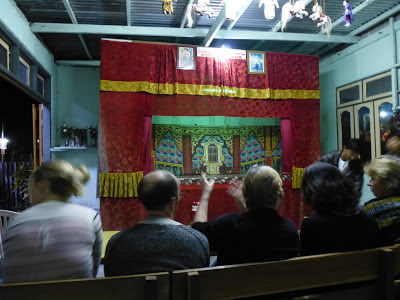 When I returned, I sat in the back of the room on a bench in the front room of a family home, where a stage and curtain had been erected. The show was oversold. The couple that runs the place looked at the crowd with big eyes and fetched more plastic chairs. When they ran out of plastic chairs, they brought plastic stools. Everyone was served a tiny cup of pre-show tea. I moved from the bench to a plastic chair on the side so two friends who arrived could sit together.

The couple shut the doors to the street and the show began.

Traditional Burmese marionettes, or yok-thei pwe, were popular during the 18th and 19th centuries and are primarily something for tourists now. But that didn't stop the puppeteer from being utterly delighted as he performed. I was sitting close enough to see him as he manipulated the dozens of strings that made the marionettes walk, dance, jump, and perform acrobatics. He was dancing along with his puppets, jumping with them in sheer joy. His wife stood next to him, handling the curtain, lights, and hokey overmodulated soundtrack which explained each puppet.

The performance was a half-hour of brilliant, unsophisticated madness, and when it ended, the audience applauded wildly, as much for the genuine enthusiasm and naive aesthetic of the couple as for the puppeteering. 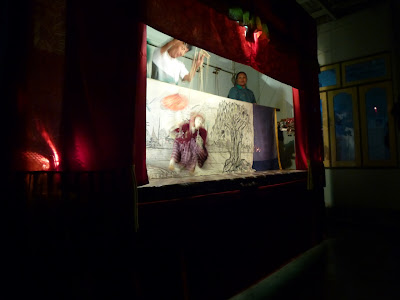 And that's true of nearly the whole of the Burmese tourist circuit. There's a genuine enthusiasm bubbling over, a sincere gratitude to outsiders for choosing to visit, spend money, and learn about Burma. I'm reminded of Laos in 2000, or Cambodia that same year, when there was a warmth and sense of welcome that was eventually diluted by commercialism and an overwhelming volume of tourists, many not particularly sensitive to the cultures they were visiting. It's not any one group's fault how things go in "hot" destinations, more a combination of factors involving money and overcrowding.

I bought two puppets from the family, as the puppeteer explained to me that he had the best job in the world, because he "dances every night to make people happy."

I turned to two young British women who were admiring the marionettes with me and said "Ten dollars a puppet! How long can Burma possibly stay like this?" 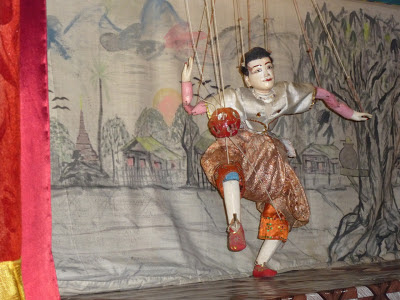 They smiled with me and shook their heads. Change is inevitable. I'd felt this same adoration and hopeless despair in Cuba. The crush of tourists is bound to damage the culture in some way, destroying the very culture we'd come to appreciate.

But for the moment, aggressive souvenir vendors were also gentle and friendly. People were happy to pose for photos, pleased to have a chat. Burma may feature seasoned tourism professionals in a year or two, but for now, there is something quite beautiful and charming about the enthusiasm of the Burmese along the tourist trail, where banana pancakes are just something to master so that visitors will feel at home.

For now, we still have a sense of wonder and innocence, a puppet show put on that features sheer joy. 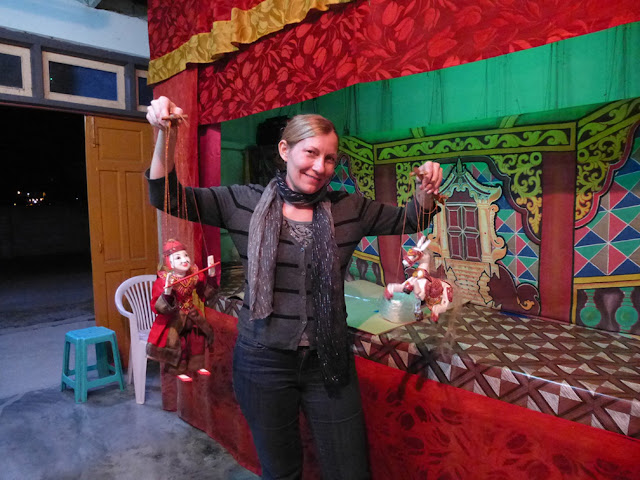 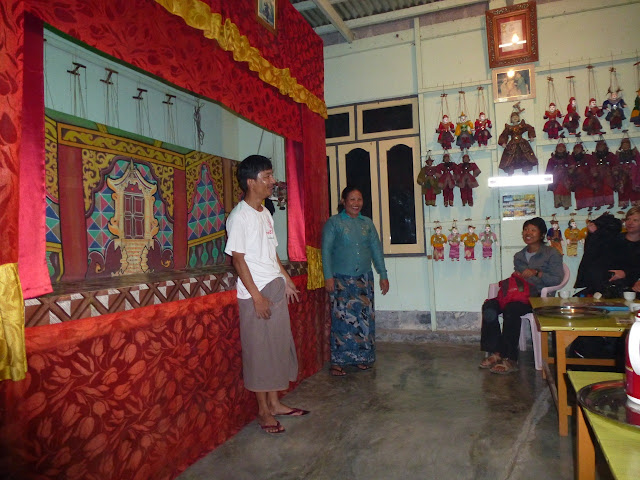