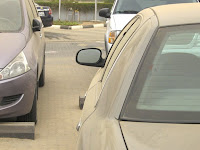 As I stood outside Hotel Ibis this morning, waiting for my company driver, I watched the building staff patiently sweep away the dust that had accumulated overnight. They were all wearing dust masks. I wished I had one too.

Kuwait City has had three days of sand storms.

"I don't know where this came from. They were saying that you brought it," said one of the office workers when I arrived at work, a glint of mischief reminding me that I better get over my morning haze and get back into character. Marie in Kuwait is silly, popular with the staff, and knows her stuff.

It's been almost three years since I was last here, as Captain M pointed out. He's still using my New York coffee mug, which I asked him to hold onto in September, 2007, when I thought I'd be right back to Cairo in a few months. He'd brought it along when he'd been transferred back to Kuwait, and I can only imagine the teasing he's had to put up with for that small gesture. Of course I won't try to reclaim it. Squatter's rights and all that. 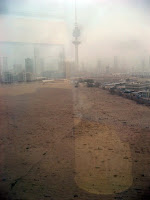 Our Senior Advisor isn't in Kuwait right now, so I have taken over his office, which overlooks a huge Sunni cemetery.

"Did you know you have many famous neighbors?" Our IT guy, who has grown a long beard since I last saw him at my good-bye lunch in March, 2006, rattled off the names of some famous Kuwaitis who were buried within my view.

And that's all I could see. The floating sand is thick. It permeates everything and makes my clothes dusty.

I knew what he meant when I ate dust for breakfast, awaiting pickup to come to work.
Posted by Marie Javins at 2:36 AM