Will the Cat Come Back? 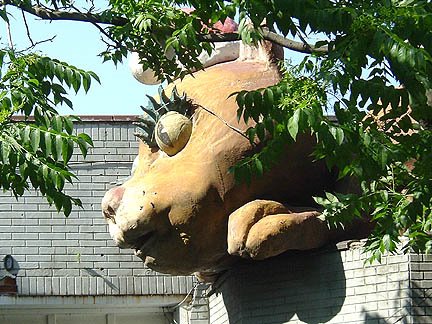 The Giant Cat is M.I.A. C'est terrible! Whatever shall we do without JC's Giant Cat?

Word on the street is that JC's Giant Cat has gone to a repair shop. What kind of place repairs giant fiberglass parade floats? How do you move a 500-pound cat?

The quintessential expose on the Giant Cat was written in the Jersey City Reporter weekly newspaper on December 13, 1992, by Andy Newman who is now at the NY Times.

The cat's owner said (to Andy, who relished the story but had no way to verify it) that a friend of his was doing demolition on a Macy's float warehouse when the storage was being moved from Manhattan to Hoboken. All the old floats were being thrown out. The friend grabbed some, and moved them to the Greene Street Boat Basin where he was squatting. Eventually, the boat basin was shut down. The friend was running a truck stop called Joe's on Tonnelle Avenue on the Jersey side, so he moved it there, where it sat on Joe's for 10 years. In the mid-70s, the truck stop was closed. "Will you hold my cat?" "Sure, for a while."

Supposedly the cat, which was moved by crane, dumptruck, and flatbed boat trailer, took down a few overhead wires during transport.

The friend was supposed to come back for the Giant Cat. But he never did. 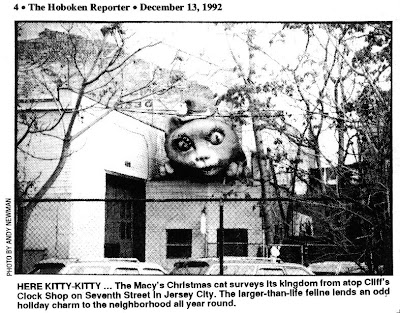