In '98 or '99, I scored *big* on American Airlines bump vouchers. I'd gone to see some UK friends in July, and airfares had been quite high, so I'd flown as a courier. Even that wasn't cheap in summer—I remember it being $550 roundtrip, but that seems too high, so maybe I'm wrong.

On the way home, American asked for volunteers in exchange for a $1,000 voucher. My hand shot up. They gave me my voucher and a seat on the next flight.

When I checked in at the next flight, the same thing happened. This time, I received a room and a meal as well as another $1,000 voucher. Score! (I tried to volunteer again in the morning, but the flight had plenty of seats.)

I don't remember where all I went over the next year, but I used the credits carefully. I went back to the UK once or twice, to that bike ride in Death Valley and also to Guatemala, where I spent a week in Antigua learning Spanish at La Union.

I timed the trip to coincide with the Day of the Dead Kite Festival in the cemetery in Santiago Sacatepequez. The language school ran a bus to it, and after about 20 minutes, I realized that the woman following me around speaking Spanish was my language tutor. It was a learning field trip! Who knew? I thought I was just going check out some kites. 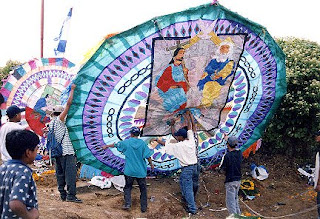 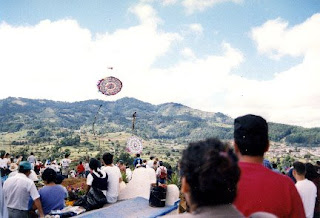 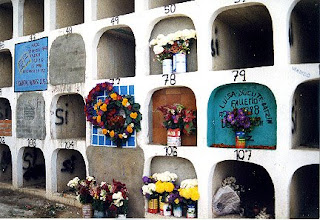 Do get a chance to practice your spanish these days?

Not really. I was surprised at how much I've forgotten when I was in Colombia.

very interesting piece I didn't know about! thanks for it and the cool photos!
Paula B.