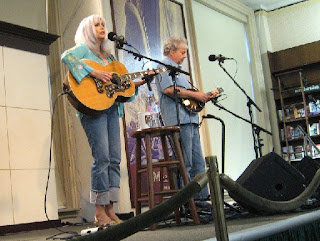 Last night C kindly (or maybe because I boldly asked outright and didn't give him much of a choice, er, sorry but many thanks, C.) let me be his +1 to his reserved seats at his friend's interview of Emmylou Harris at the Union Square Barnes & Noble.

Emmylou Harris is one of my musical heroes. Though I did not buy my first EH CD until 1995 (the groundbreaking Daniel Lanois-produced Wrecking Ball), I've known of her peripherally my entire life. She's a local girl, a year younger than my mother, and because she played down the street from my elementary school and around the DC suburbs ever since I learned to read, I knew her name long before I'd heard of Gram Parsons, or the other songwriters whose songs she sometimes sings.

Listening to her talk about her life was inspirational. She doesn't just sing and then sing some more. She reinvents herself frequently. I'd like to be like that now. Even better if I could pull it off when I'm 19 years older, as she does. 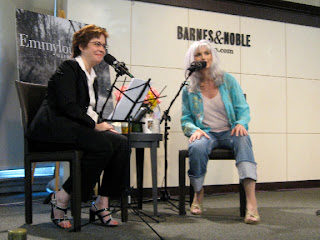 As an added bonus, I got to talk to Irene, who was working on the sound board. I was friends with Irene 20 years ago when I first moved to Jersey City! We'd probably lost touch 19-and-a-half years ago, and it was great to make contact again.

The Birchmere was one of the first clubs in Alexandria to have a non-smoking room.

"She reinvents herself frequently."

Now that's a great idea. That way, you never have to say you're stuck in a rut...instead you're just ready to switch gears and do something new. I think I need "Reinvent Yourself" painted on my wall in letters about 3 feet high.

I'm overdue for an upgrade myself.