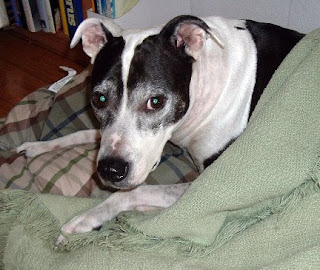 Today I mourn the passing of Murphy. Though she spent her last few years in San Francisco, her spirit roams the apartment I live in as well as the large park in front of my 150-year-old Victorian brownstone apartment building.

Murphy seemed to fall prey to a sudden virus, but then the vet discovered that she had a large tumor on an internal organ, which had caused all kinds of problems that are simply not possible to heal.

Because of Murphy and her need for walking, Yancey insisted on buying a condo on Hamilton Park back in the mid-90s when he'd started looking for an NYC-area home. This paid off in spades first for Murphy, then for Yancey as property values skyrocketed, then for Yancey's new wife who was surprised and amazed at the short commute to her SoHo office, and ultimately for me, who could never normally afford to rent a large apartment in such a fantastic location.

Murphy was, it has to be said, kind of a punk. When Yancey first saw her as a puppy at the animal shelter, she bit him.

She loved me and Roberta, but she would growl at Michael Kraiger. She once snapped at the owner of the coffee shop down the street. Yancey once nearly came to blows when an off-leash dog ran up and Murphy jumped at her. (That is, Yancey had an argument with the dog's owner, not the actual dog.) But Murphy's adoration of me (which might have been tied to foods, walks, and the fact that I'd get up in the middle of the night to cover her with a blanket when I dog-sat) seemed unconditional. And when I was sad—which went on for a long, long time—Murphy was attentive in that empathic way that only dogs can be. There were times when she was the only one able to make me smile, back between Uganda and Kuwait in late 2005.

When Murphy moved to San Francisco, she was already about 13 years old, and I knew then she'd never come home. I'm not surprised that we lost Murphy. But it's still sad. Viva la Murph. 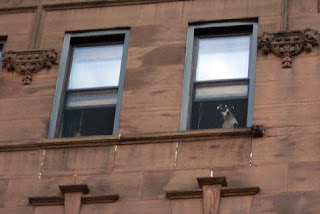 Thank you for the write up. It was so sweet. We cried as we read it.

I cried when I wrote it. I'm crying now. Shit, I'm at work and I need to stop crying now.

:) I know how that feels. Had to put my 13yo January to sleep because of illness and I wept buckets last year. INcidentally I came across blog by sheer chance at a time when I am just thinking of adopting 2 puppies which are a few days old. Tough decision. Take care. STAN

Aww... I'm sorry that Murphy is gone. I know she was your friend.

I'm so sorry to see this. It is so hard, no matter what age they are when they have to leave us.
I hope all of your good memories of Murphy stay with you forever and bring you solace in during this difficult time.

All our best,
Susan & family