I went to a JC oral history symposium today at the JC Museum. When the City Council President said he'd lived in a cold-water flat as a child, he stopped and looked up.

"Does anyone here know what a cold-water flat is?"

A few people raised their hands. I was one of them.

"It's an apartment without heat or hot water."

My old condo had been built as a cold-water flat. Though now it has, of course, a hot water heater and baseboard heat. 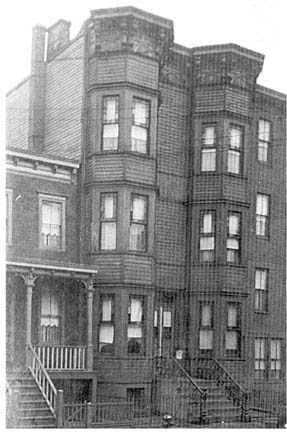 My old block had about 14 single family homes, and dozens of retrofitted cold-water flats from the late 1800s or early 1900s. This isn't as awful as it sounds, (though my sixty-year-old neighbor, who had lived in my place when he was four, remembered it as being "really cold"), because the apartments all had gas heaters that sat in fireplaces (which weren't for fires at all). The gas was also used for lighting.

A 74-year-old neighbor had kept her gas heater, and my upstairs neighbor had sandblasted and restored it for her. It was exquisite with all its detailed decorative metal work.

I don't have a photo of that gas heater, but I spotted this one on a realtor's website yesterday. 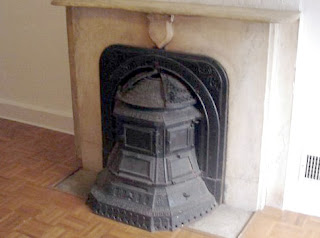 Incidentally, there is a good chance that the lovely marble mantel in that photo is actually gray slate. Craftsmen would hand-marble the slate.

My old place had a mantel that had been painted over. Imagine my surprise when I stripped off the first layer of paint to find beautiful marble underneath.

Then imagine my horror as the marble came off too, leaving me with slate.

Holy crap -- I just saw one of those heaters out by the trash in my neighborhood, the other day! I couldn't figure out what it was. It had the same crazy metalwork....the heating element is exposed on the other side, facing the fireplace, right?

I'm not sure...my knowledge only extends to the outside of the thing.

I wonder why some homes got radiators and some got "cold-water." You'd assume it's about money, but my old place on Avenue B was built as tenements in 1896, and no way did the immigrants piled in that apartment have money.

If I weren't so lazy, I'd try to figure it out.

Can't believe someone threw one away though. I would totally scavenge something like that, get it stripped, paint it with that shiny black metal-paint, and put it in my garage along with my spare hundred-year-old eight-foot-tall pocket door.

You know, for when I have a Victorian house one day in my fictional future (the future where books about personal journeys through Africa make lots and lots of money).

Yeah, we always joke about "restoring our place to its Victorian splendor." It's expensive.

I only got a look at that heater by the trash for a minute, but the more I think about it, it may have been an early electric heater designed to mimic the look of one of those gas jobs. I think it had an electric heating coil. Probably looked more genteel than an ordinary space heater. But since it was electric, it had a big advantage: Instead of poisoning you with gas fumes, it'd only burn your house down.

If I give up on my fantasy of owning a Victorian house, you can have all my tools and reproduction hardware catalogs. And the pocket door with the etched glass.

I find it's much easier to wait until an insane gay couple has restored a house to its Victorian splendor, and then buy it.

Then again, you find that *maintaining* said splendor is expensive too.

Marc's house is amazing. And disturbingly, I knew exactly where all the repro Victorian touches had come from.

It's one of my obsessions.