School on the Hill 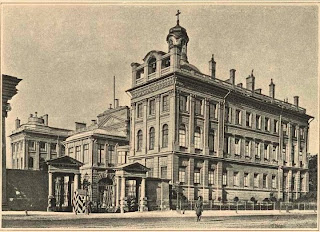 Another fun fact that I learned yesterday at the JC oral history symposium: Dickinson High School up on the cliff above downtown was modeled after Anichkov Palace in St. Petersburg.

The most I knew about Dickinson before was that it is humongous, and in 2004, a student there managed to order a BMW online and have it delivered to him before anyone caught on that he was just a kid.

Below Dickinson, down in my neck of the woods, we have McNair Academic. It's a much smaller high school that this month once again made the Newsweek list of best high schools in the country. And to think it was just about 20 years ago that JC schools were judged so bad that the state took over...
Posted by Marie Javins at 4:36 PM

What an inspired and crafty kid! Except that he used his real name...

Back in my day, we eluded the authorities, then drove the stolen vehicle to a Patagonian parts shop personally. Uphill. In the snow. Both ways.