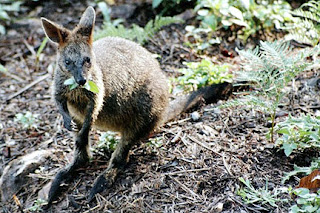 Had enough wallabies yet?

While you've been subjected to mini-kangaroos, I've spoken to a pal's comic book class at School of Visual Arts, moved seven percent of my savings out of dollars, avoided going to the gym twice, had an annual (insured) physical, and shared hummous with other perplexed expat-returnees. "What do we do now?" No one ever has an answer.

I'm a better expat than I am home-country-resident. As an expat, life feels like a glamorous adventure. But coming home—after the first week in which you are bizarrely thrilled with things like automatic washing machines—is returning to problems you may have tried to ignore and the mundane daily routines. It's like culture shock in reverse. I've always said coming home is the second hardest part of long-term trips abroad.

The first hardest part is the colossal organizing feat that one must execute prior to departure. Or at least it used to be. These days, I can do that part in my sleep. But I'll never master the art of seamlessly inserting myself back into normal life.
Posted by Marie Javins at 9:19 AM