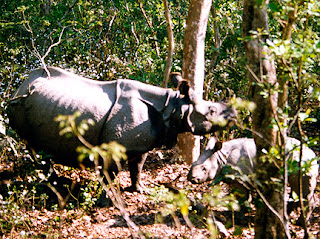 So why exactly was I riding elephants in Nepal in the last entry?

It was an elephant-back safari in Nepal, with the intended purpose of searching for rhinos. 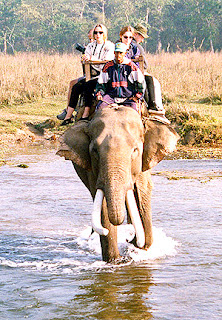 This is the most marvelous way of seeing rhinos. I've seen them on walking safaris (terrifying but exhilarating), vehicle safaris, and from benches near waterholes. But the best way of seeing a rhino is from the back of an elephant.

The rhino is apparently not too terribly clever, and when he sees and elephant, he thinks "Hey, an elephant. That's normal." He doesn't notice people sitting on top of the elephant. So you can get really close to the rhinos and they don't even care that you're there.
Posted by Marie Javins at 12:25 PM

Missing travels now that you're back Stateside?

Yeah. Going to work every day, sitting at a desk, then coming home just doesn't offer the same challenges.

Though it has its own unique problems, of course. Like how to fit into a two-inch space on a crowded train, how to avoid the crowds at the laundromat, how to drag something heavy up four flights of stairs. The drama!