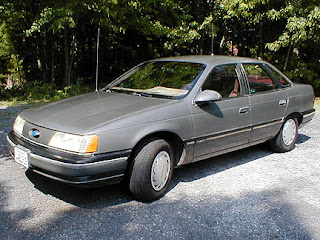 Turbo and I acquired Henry in Torrance, California, for a thousand dollars on my birthday in April, 2002. Henry had been a fleet car and had new tires, a sun-bleached matte finish, and 100,000 miles on him. Why did we get a Taurus? Because when buying a used car, picking one according to your zodiac sign is as reliable a method as any. That and I had heard somewhere that old Tauruses were reliable. Or maybe that was my opinion of myself. We called the seller in Torrance from Don's house in West L.A. And when we saw Henry and heard how he purred and, uh, worked and stuff, it was love at first sight.

Henry does a lot of sitting in my single-car garage for months on end these days. I don't own my own home, but I bought a house for my car.
Posted by Marie Javins at 10:09 PM

Good to see that Henry is doing well at his advanced age. You didn’t say how many repairs (surgeries?) he’s had, though.

I bought a 1994 Mazda Protégé DX with about 38,800 miles back in 1996 for $8,000. The car now has about 139,000 miles and is doing fine mechanically, still has its original fuel system parts, etc., although I did have to pay over $1000 to fix front axle and bearings problems last year. The car would look almost as nice as Henry does, if a deer hadn’t run into the left front corner a couple of years ago. I would have sued that stupid deer if I could have.

Henry does not normally look so shiny as in that photo. That's his runway shot, taken right after Turbo buffed and shined him in July, 2002.

Henry has had a few operations, though nothing life-threatening. He got a major tune-up a year ago, and he's had new tires, a new water pump, a new alternator, and various hoses over the last few years. He was the miracle car for some time, surviving on just a single new bushing for the first four years.

He's definitely at risk--apparently for a head gasket injury--but he's quite durable and loyal overall.

Initially, I looked at used Toyotas and Hondas but they were VERY expensive compared to Mr. Henry.

Oh and I too had a deer encounter once! But with an ancient Volvo station wagon, not with Henry.

Driving at dusk has never been the same.