Me and the Doc 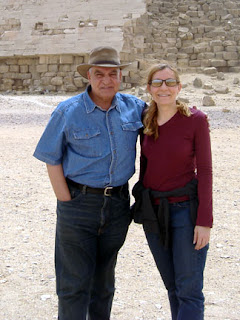 Dr. Zahi Hawass is the head of the Supreme Council of Antiquities here in Egypt. He is one of the most famous archeologists and Egyptologists alive today. He regularly takes on pyramid theorists and new age groups that think the pyramids have mystical purposes and could not have been built by ancient Egyptians. He's a bit of a cowboy-Indiana Jones type, and is famous as much for his brazen outspoken attitude as for his studies. He's the man who controls who can dig where and when, and who is allowed to excavate here. He makes people angry all the time with his decisions, and he doesn't quietly ignore them but instead takes them on in public.

And today, Dr. Hawass happened to be standing outside the Bent Pyramid at Dahshur while a French film crew organized their shoot. We went over and talked to him. I was a bit starstruck as I'd just been reading about him on his highly entertaining website, but Craig and Jake had the presence of mind to capture the moment.
Posted by Marie Javins at 12:07 PM

Check it out! He was in the NYTimes today.

". He regularly takes on pyramid theorists and new age groups that think the pyramids have mystical purposes and could not have been built by ancient Egyptians."

In grad school we called those people "Pyramidiots"