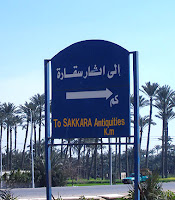 "You will stand there and wait for another car."

The English teacher in the minibus pointed to a spot on the corner of Saqqara Road and the 1.5 kilometer long access driveway that led to the Saqqara Step Pyramid and archeological site.

I waved good-bye to him and the driver as they pulled away towards Saqqara village, then turned to face a bleak wait.

And off I went, passing fields, goats, and papyrus shops along the way. Tourist buses whizzed past me, full of groups that had just come from Giza and were making the circuit. Giza. Saqqara. Memphis. Hotel. I wondered if they felt sorry for me, walking solo along the road in the middle of nowhere, Egypt.

Then, a beaten-up black Lada taxi slowed. The driver motioned me in. "C'mon, this is a long walk!"

I jumped in. The occupants of the backseat—a European couple—cheerfully said hello. We zipped along to the ticket office, which wasn't that much farther. I'd almost been there. 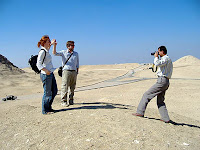 50 pounds for admission! Wow, that's a lot. $8.75. But in dollars and euros, this is nothing. Especially for someone who has spent hundreds of dollars to fly to Egypt to see the ancient sites. Not everyone took the public bus to Saqqara. In fact, almost no one did this, with good reason (long walk). I forked it over.

The driver, Adul, took us up the hill to the 4,600-year-old Step Pyramid. Yep, that's old all right. This was Egypt's first pyramid, an ancestor of the other pyramids. I could see three to the right, at Giza. To the left were the "Red Pyramid" and "Bent Pyramid" of Dahshur. I wouldn't get to Dahshur today. I'd have to make another trip. 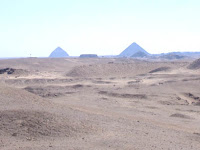 Adul kept telling me I was beautiful when the European couple was out of sight, so I decided to stick to them like glue. Which turned out to be a good thing as they revealed that one of them was from Spain, one from Austria, and both lived together in Addis Ababa, Ethiopia. We had a grand old time talking about Addis and I was so envious by the end of the trip--they were so happy together and living an adventurous dream together in Africa. I know what a fantastic life it can be.

After we toured the ruins, they invited me to go along to Memphis with them. Once this had been the capital of Egypt, a bustling cosmopolitan city. Now, my guidebook said, it consisted of a few statues and a dirt enclosure.

That's not far off but we did get the opportunity to look up the skirt of the giant statue of Ramses.

We then sat through a semi-pleasant but semi-excruciating cup of tea with a papyrus dealer. We were all keen to get going, and at least one of us was waiting on the hard sell, but we escaped unscathed and un-papyrused. 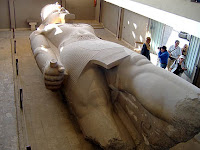 "Can you drop me at the metro?" Adul did. He'd become less fresh after napping while we toured the sights. I gave him 50 pounds. The same as the admission at Saqqara.

I boarded the women's car at the last stop on the line. The line of cars pulled out of the station, as the sunset lit the faces of the women and children around me.

The day hadn't worked out quite like I'd hoped it would, but any day that you get to look up Ramses' skirt is a good day.
Posted by Marie Javins at 6:29 AM