Commuting to the Sights 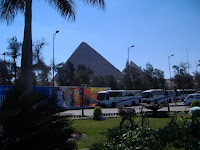 Getting to the Great Pyramids by public bus was dead-easy.

I caught a taxi to Midan Abdl Moniem Riad. It's a small bus park in front of the Ramses Hilton.

"Aina bus haram?" I went up to the information booth and butchered the Arabic language. That might mean "Where bus pyramids" or it might mean "I bus bathroom."

The man behind the counter motioned in a U-turn and then to a spot in the middle of the street. Ah, of course. I followed his instructions to a small curb at the foot of the 6th of October bridge. Traffic raced around me.

"Haram bus?" I asked a policeman.

He pointed to the spot I was standing on.

"Right here?" I was dumbfounded. It looked nothing like a bus stop.

He and the three men standing with him laughed and reassured me.

I waited about 40 seconds and then a bus slowed down. They all motioned me on.

"Giza?" I asked the driver.

"Haram. Pyramids." He nodded, took my two pounds, and motioned me back to a comfortable seat in the air-conditioned bus.

It was Friday, so there was almost no traffic (that's like Sunday morning for us). It seemed like we were in Giza on Pyramids Road in less than 20 minutes. I stared out the window, passing papyrus shops and carpet shops, a McDonald's and Hardees, and a big hospital.

Suddenly there they were, dominating the skyline. And then they were right next to us, rising up out of the desert. And HUGE.

I've been to see the Giza Pyramids before, but that didn't stop me from grinning and snapping photos. When I got off the bus, I had to stop and stare in awe, at least until a kid approached me to try to sell me postcards.

But I wasn't in Giza to go to the Great Pyramids. I was there to find a way to go to see Saqqara and Dahshur. There are something like 90 pyramids along the Nile, and my plan was to get a look at some of the less-famous ones.

I hiked back to the Saqqara Road turnoff. I stood for a while, waiting for a taxi to stop. When one did, I asked him "Saqqara and Dahshur?" I wanted to see both, but didn't want to bother with Memphis which the guidebook rated low. He nodded. I got in and he drove a few blocks.

Then his friend jumped on top of the car. The driver stopped and the friend poked his head in the window.

"Saqqara is very far from the road. Very difficult to get to. You must go to Abu Sir and ride a horse from there."

I got out and started walking away. He chased me.

"I don't want to go to Abu Sir and ride a horse. I want to take a taxi to Sakkara and Dahshur."

I got back in, and then realized we hadn't negotiated an amount. I had a feeling of impending doom. I suddenly wanted very much not to be in the taxi of a man keen to sell me his friend's horse ride. As soon as he slowed down in traffic, I got out and walked back to the Saqqara minibus, the driver honking and calling after me. He gave up after a while. 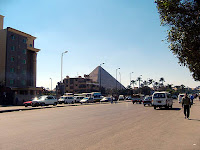 In the Saqqara minibus, I sat down next to a man who turned out to be an English teacher. "It is only 1 pound to Saqqara, but you must take another car 1.5 kilometers after we drop you off."

As we drove down Saqqara Road, the English teacher explained to me that in the past, everyone wanted to go to America. But now, no one wanted to go to America, because Americans think all Arabs are terrorists and maybe would beat them up. I tried to explain to him that there are many Arabs in New York, but I don't think he believed me. He also told me that America should not declare war on Iran because Iran is much stronger than Iraq. I told him I did not think Americans would support this and that America was too busy to invade Iran. I don't think he believed this either. Which isn't really a surprise, since the newspapers here are presenting an Iran invasion as a nearly done-deal.

Wait, the guidebook rated Memphis low? Why, for the barbeque alone, not to mention the Civil Rights Museum and...

I hate to break it to you, but the Egypt newspapers may be right. A lot of the rhetoric we're hearing about Iran sounds a lot like what we were hearing before Iraq.

What??? No! Can they do that? Before Iraq, I mean, it was so obviously a done deal... but I figured it was posturing now, just threats since there is clearly not enough manpower to be fighting that many fronts.