A Day at Dahshur 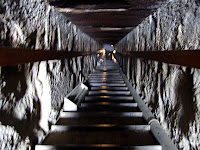 Exhausted, I'd slept until ten this morning. And then, when I'd moved, my legs hurt.

What had I done yesterday to incur the wrath of seldom-used thigh and buttock muscles? Were they so anxious to remind me that yoga only works if you actually attend class and do it?

I'd used "walking down-then-up at a crouch for 200 feet each way" muscles yesterday, as I'd half-slid/half stepped down a steep ramp (with strips of steel laid across every foot as makeshift stairs). I hadn't even realized visitors were allowed inside the Red Pyramid at Dahshur, so I was surprised when that was the first option we saw when we got out of our taxi. (I mean, after we saw the policemen on camels who offered us photos for baksheesh.)

Down, down, down the ramp we went, crouching and shuffling to get through the tunnel. It was about four feet high. Finally, up ahead, I heard a mystical song.

"That's funny," I thought. "There's a mystical CD played to make being inside the Red Pyramid more atmospheric."

Then the tunnel ended, and I straightened out my back (with effort) to enter the first chamber inside the pyramid. There was a stinky ammonia smell inside, but there was no CD. There were a dozen new age people singing beautifully, some of them with their arms stretched high into the air.

I checked their name badges. They were from around the world. One was from Sweden, another from Australia. But the company is American. (Dr. Z.H. later asked "Are they from Santa Barbara?") They were doing something with the harmonic resonance inside the pyramids, perhaps unleashing some kind of pyramid power. 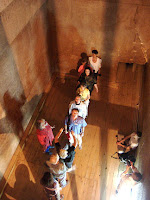 They seemed to have succeeded in unleashing a massive sandstorm, and when we climbed (slowly, with newly complaining muscles) back up the ramp and emerged into daylight, we were pelted with grainy sand.

Bleh! It got in our ears and hair and clothes. If you spoke, it got in your mouth. Wasn't ideal for photos either. Was this Day One of the 50 days of sandstorms that herald spring? If so, I was glad to only have to endure nine before heading to Spain, then J.C.

We got back in the taxi and headed through the sand to the Bent Pyramid nearby. We'd gotten an early start because Craig had a shoot that afternoon in 6th of October City (he teaches documentary production at AUC). But sand was causing white-outs across the highway. So instead of going our separate ways after the Bent Pyramid, we found Jake a hotel room in our sane neighborhood of Zamalek, and the three of us headed to Cafe Arabica for a leisurely lunch, chatting while the wind and sand raged outside.
Posted by Marie Javins at 5:26 AM

Just got off the phone with Jake. "What happened to us yesterday? I can barely walk up stairs."

Glad I'm not the only one with the pyramid curse.

Apparently, I have "sore quadriceps." And the cure is... time. Maybe some aspirin. A little massage.

I'm a little jealous. You are seeing some great sights!