The Temple of Hathor 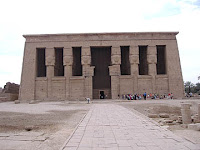 It was only half past eight in the morning. Ballooning hadn't taken very long. Now what?

I walked to the train station and caught the 9:35 a.m. train from Luxor to Qena. An hour later, a taxi took me from the Qena station to the Temple of Hathor at Dendara.

It was a nice temple with some original paint still intact. The highlight was crawling through a hole to get into a tomb. 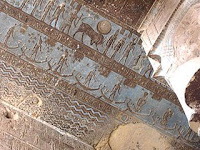 On the way back, I paid the taxi driver to get me back to Luxor. I don't know how he did this, but he managed to avoid the convoy. All the other tourists had to ride with the police "protecting" them, while we went alone. No one stopped us.

When we got to Luxor, the taxi driver tried to wheedle more money out of me. I had stepped out of the taxi and was lecturing him loudly that it was unacceptable to change the deal after it was closed, when a man jumped into the conversation. 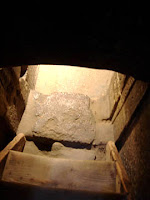 "Is there a problem? I will explain it to him as I speak both English and Arabic."

The man spoke firmly to the driver (whose English was just fine) in Arabic. He then turned and tried to sell me a ride on his felucca since he'd "helped" me. When I finally escaped him, it was three. I checked into my hotel room, used one of the free dial-up internet numbers that is offered throughout Egypt, then fell asleep. A night on the train followed by a balloon ride and a train-temple venture had left me too exhausted to venture outside and battle wits with touts.
Posted by Marie Javins at 2:25 AM