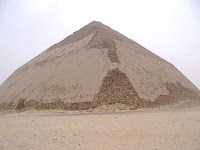 The Bent Pyramid is cool because it's, um, bent. I mean, it starts off sloping at one angle and then changes halfway up. Experts theorize that the original concept didn't work out so the builders changed plans mid-stream.

I don't care so much why they did it as that they did it. The reason so much limestone is still on the Bent Pyramid is presumably that it's too steep to scale easily. The Giza pyramids were originally cased in limestone just like this.

I wish I could say that there is a cool and easy way to get to Dahshur by public transport, but it would take first a minibus from Giza, and second some kind of transport from the village with the Dahshur turnoff. I couldn't have done this one on my own. Craig called a taxi driver he knew and set the expedition up. He (Craig, not the taxi driver) posted a few photos on his own blog. 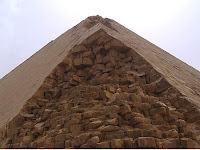