"What's your name again?" asked my regular waiter at the cafe downstairs from my apartment.

"My name is Mohammed." I almost asked him if tomorrow was his birthday, but stopped short when I realized how stupid that was. It's like asking a guy named Jesus if tomorrow is his birthday on December 24th.

I eat at the same cafe a lot. I was just there the night before. Normally, I wouldn't have gone there two days in a row, but I was starving, my friends (all three of them) were out of town or busy, and I was too exhausted to hunt for somewhere different.

I'd gotten up super-early to go to the Suez Canal. It was annoying searching for the minibus to Suez, because one man sent me to the right, the next to the left. I almost gave up and went home to sleep, but my love for giant ships kept me going.

I'd looked, taken a few surreptious photos at great risk to my memory card and personal freedom. (It's a military zone.) I'd had a lemon juice at a hotel with a view, then headed directly back to Cairo to clean my apartment. The Hot Landlord was bringing a potential tenant by at 4 and once I'd moved in, I hadn't bothered to do any housecleaning short of occasional dishwashing.

The landlord never showed up, but my apartment is clean. 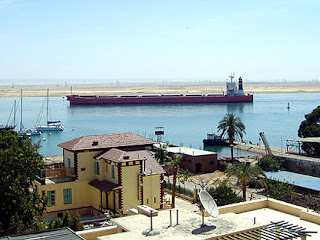 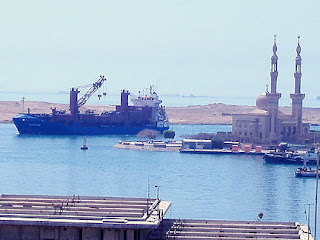