Homesteading on Avenue B 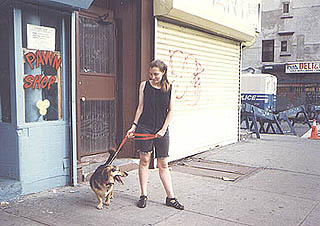 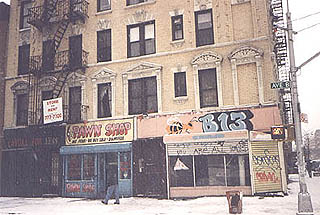 I bought my first condo, on Avenue B in Manhattan's Alphabet City, in the summer of 1993. Or maybe it was late 1992. It took ages to move in, because I had to get it renovated first. The building had been a tenement in 1898, and the bathtub was still in the kitchen when I bought it.

The cost was $56,500 for a small two-bedroom place with low maintenance and taxes. It had been a couple of years since the last real estate crash brought prices in Hoboken and New York down by half in some places. ("Real estate never goes down.")

I didn't move to Avenue B and 13th Street for the ambiance or pleasant atmosphere—I moved there because for $5,650 I was able to get my own place—though it had a certain appeal. There was a hardware store with a beauty salon in the back. There was a store that sold old VCRs across the street, and kids would play video games in the back. I could head ping and zoing in between M9 buses tearing down the avenue every few minutes.

In the top photo, you can see that 13th Street is blocked off. That's because the City had evicted three buildings of squatters in 1995. The squatters knew it was coming and they were up all night banging on cans and holding bonfires in the middle of the street. NYC 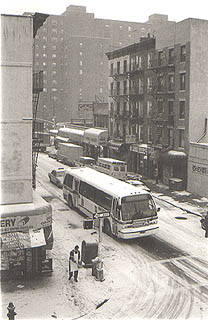 brought in a tank named "Sunny." The area was cordoned off and I had to show my ID to get in an out the next day.

Now the area is full of restaurants and high rents, and giddy young people drinking lots of beer. I sold my place in January 2001 for $250,000. I thought real estate had gotten too crazy for words and there was no way it would last.

I still believe that, but I'm stunned at how high prices went before they started to go back down. My place on Avenue B—it's the one on the third floor with the small dryer vent—would go for $400,000 now. ("Old rules no longer apply.")

Do I regret moving? No. I wasn't comfortable in the neighborhood after it changed, and if I'd hung onto it, I'd be liable for capital gains tax as you only get a $250,000 profit exemption. And I ended up in a much nicer, homier area in a bigger apartment. I actually come out ahead by having had two places in the last 13 years.

The plan now is to go to Cairo for a while, then see where things take me. Maybe I'll be back in April to buy a new place. Or maybe I'll run off with a camel herder into the desert. I like that I won't have to rush home to deal with my place.
Posted by Marie Javins at 5:51 AM

I totally remember the squatter riots. Everyone got angry with the mayor kicking them out. They argued that they had "Sweat Equity"!

Not entirely true. If you own a residence for more than 2 years, or have lived in it 2 of the last 5 years, you don't pay tax on the gain.

Not that it makes any difference in your situation. You made the move cause you weren't happy there. But in terms of planning any future tax strategies, its an important thing to know.

In terms of planning future tax strategies, you might wanna look that one up, HB. :) What you say is absolutely true, if you add a comma and then type, "to a max of the $250k for singles or $500k for married couples."

Ooopss. You're right! My mistake. I thought they had done away with the limits. Sadly, I'm not in danger of testing the limits anyway. Sorry for the confused comment

Your confusion is due to changes they made a few years ago, in which things were loosely defined and everyone was jumping for joy that the real estate capital gains tax had relaxed. It's only about the number of years though--something like if you can prove you had a really good reason, they'll let you slide on the 2-year minimum. And who can't come up with a reason? (I masquerade as an unassuming writer or dimwitted Photoshop artist, but am secretly a real estate shark. Um. Sort of.)

And Don, they did have sweat equity. Their lawyers didn't make the concept up--the City had allowed several squatters to buy their buildings before that. The situation is this: when no one wanted to live in New York, it was cheaper for landlords to just walk away than to try to sell or rent out their apartments. They would vanish, and property taxes would still accumulate until NYC would seize the properties for non-payment. Then the City became an unwilling landlord of decrepit, boarded-up properties. Which sat there for years. Many of these buildings were eventually squatted, and rehabilitated. Some buildings were purchased by the squatters, who made deals in which they paid the back taxes and legally took possession. Then the policies changed (I suspect because suddenly real estate was worth more than the $56k I spent, and suddenly the cycle went back around and NY was the place to be again) and rather than selling to the people who had renovated the buildings and made the neighborhoods safer, they brought on the tanks. Lawyers fought it but ultimately, the one with deed has the right to sell it to developers instead of the residents, just like what just happened in Stuyvesant Town.

Who is right? Who is wrong? Well, it seems clear to me that there are two sides to the story. I'm not sure who was right, but I do have sympathies for the residents, because I saw them daily and they weren't the young, drug-addled punk rock kids of myth, what you think of when you think squat. They were middled-aged artists and creative types, some Vietnam vets, and some old men. But I don't have total sympathy. The writing was on the wall--they should have gotten their acts together sooner and bought their squats like the guys down the street did, or the ones on East 7th. As long as you don't have a free and clear title, you are playing with fire.

My, that's a handsome dog with you in the picture!

I had to carry Guppy up and down the steep stairs because he was afraid of them!

Shame there was no real follow-up to that story from the link.
(I'm sure there's one somewhere, but I'm too busy paying bills with no money to look)

It was a very thorough explanation, but not nearly as thorough as left-wing WBAI was busy reporting.
The REAL crime, of course, was that at the time, living next door, it was HUGE... but turn on your TV and it was never really "news". I wonder just what actually happened to those buildings the city took back with a Tank & some snipers....?

Heh.
In case you were wondering just where that "trend" from 13th St. was going... you can read this or just start screaing now...

"Houston and Delancey and Avenue D are getting a 120-foot height cap if the developer includes affordable housing."

And what I would like to hear is how they define "Affordable."