My garage door rolled up to expose a monumentally disastrous mess.

"You can't fit your car in there with all that crap!" exclaimed Kraiger.

We hurriedly tossed the final load of stuff into the garage, clicked the remote control to shut the door, and drove to the Holland Tunnel. Traffic was slow but moving, and in 20 minutes we were in front of my sublet on East 5th and Avenue A. I pulled up in front of a hydrant and put on Henry the Ford's emergency flashers.

"One of us has to stay with the car at all times."

I dug the unfamiliar set of keys out of my pocket. Hey, that's clever. The woman I'm subletting from had drawn an 'M' on the keys. 'M' for Marie. My set of keys.

The big key didn't work. The small one took a little fidgeting, but opened the door. Kraiger and I uploaded a box, backpack, laundry basket of paperwork, and 11 x 17 scanner into the hallway. He waited with Henry while I carried a load up to the fourth floor.

The key didn't work. I tried the other key. Nothing. Shuffled a bit, eased the key in and out. This was a problem. What would I do? Go to Babcock's and live with Czop, Pond Scum, and Czop's dog for a month? What about the money I'd paid for the sublet? The owner had gone to Argentina.

"These aren't the right keys," she said with a glance. "Do you have others?"

"No... wait." If I did, I'd have thrown them into my Manhattan Portage bike messenger bag, the same one I'd had for years. The one that was slashed in Mongolia in 2001, then repaired in Nairobi later that same year.

At the bottom of my bag was a different set. I tried them. They worked.

"But I used this key to get in the front door! Strange."

Then I realized. The keys that had gotten me into the building were the keys Kraiger had kept to my place, for when I was in other countries and there were emergencies. No wonder there was an 'M' on them. My house key had just gotten us into a building on East 5th.

Back downstairs, Kraiger and Henry had scored a much-coveted East Village parking space. He (Kraiger, not Henry) helped me carry the rest up into the tiny studio.

"It's kind of small." Kraiger was skeptical. It's perhaps 280 square feet, the size of a hotel room. 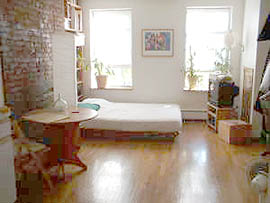 We locked up and went back to Jersey, to get to work on my garage.

It took an hour of rearranging and stacking, but in the end, everything fit alongside Henry. Only my bicycle didn't fit. I dropped Kraiger off in the Heights, parked the car in the garage, carefully squeezed my bike in just behind Henry's driver-side rear wheel, and walked to Grove Street.

There had been a mix-up with the seller's title company and my check for the condo would not be ready today. What's another day of debt when you've had so many? I walked— exhausted —to the PATH train and caught the 33rd Street train home. To Alphabet City.
Posted by Marie Javins at 5:56 PM