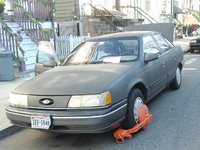 My next door neighbor was yelling through my intercom. Today was move-out day. I'd been up since before five, packing and cleaning and panicking. I'd thrown everything left into the basement and smiled through the walk-through. The young couple buying my place LOVE it. They love the character and Turbo's hard work. And Michael Kraiger's hard work, and Al Huckabee's hard work. And my hard work. I hope they don't hate me when the first 100-year-old problem occurs.

I'd then raced up to the Heights in Henry to pick up Kraiger, who was helping me move the last bits out of the basement and into the garage, then going with me to drop my month's supplies in Manhattan. We'd gotten in about 40 minutes ago and now were sweeping and scrubbing the condo. Closing was in 20 minutes, though I wasn't attending. I'd signed over power of attorney to my lawyer. Closings are horribly dull and mostly consist of signing one's name a lot.

Casey buzzed again as I raced to the front door. I opened it to find not just Casey but also Larry from two doors down. Both are 65 years old and retired. Casey is originally from North Carolina and has been in an interracial marriage for 35 years, since it was a lot harder than it is today. Larry lived in my apartment when he was four years old. He said it was really cold then, with only two coal-fired stoves for heat.

They both looked really unhappy. For a second I was honored that they were sad I was leaving. Then it dawned on me.

"I hate to be the bearer of bad news," drawled Casey in his southern accent.

They both nodded. Henry the Ford Taurus was clamped and couldn't move.

The parking man zipped by then in his little electric car. Larry ran out into the street and waved him down, and I went and argued for a while.

"I've only been here 40 minutes. I was up in the Heights! I haven't been here two hours."

I argued and argued until he finally said, "Look, it's too late. I already put it in the computer. There's nothing I can do."

So Kraiger and I loaded everything into Henry. I didn't own the condo anymore. I had to get out. 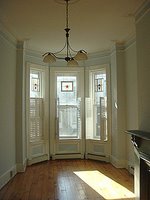 Casey offered me a lift up to the Parking Bureau in his 1994 Ford Taurus. He even waited while I ran in and paid the $75 fine. (It's $125 for second offenses but fortunately my first didn't seem to be on record).

Henry was un-booted by the time we got back. I hugged Casey good-bye, took one last look at my beautiful home, where the sunlight was hitting the golden heart pine floor through the stained glass, and locked the door. Henry was about to cry, so Kraiger and I rushed off.
Posted by Marie Javins at 6:35 PM

I forgot to mention George, from across the street. He is MUCH older than Casey or Larry. They used to call him Left-Turn George, because he had an old car that he only drove around the block. He shook his head in disgust at the boot and said "Merry Christmas, right?"