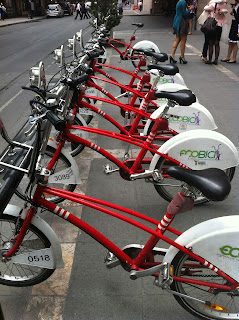 "I belong in the city," I thought as I navigated the metro in Mexico City. I enjoy the anonymity of metropolitan areas, but mostly I like the seamless ease of melting onto a subway with just a look at a map.

I'd been in Mexico City in 1992, but that didn't mean I remembered anything much about it. I had to pause as I left the Norte bus terminal. "Donde es la metro, por favor," I asked a guard.

I descended, bought five tickets from the booth clerk at the phenomenal bargain rate of three pesos each, and slipped through the turnstiles. I nearly stopped, surprised at the signage around me. So much hand lettering! All so old and probably the same as what was painted here during my 1992 trip.

A long darkened hallway gave me pause as I remembered Mexico City had a reputation for petty crime, but it was just an exhibit of constellations. I walked through, suddenly feeling like I was in the United terminal in Chicago, with the tunnel and flashing lights. 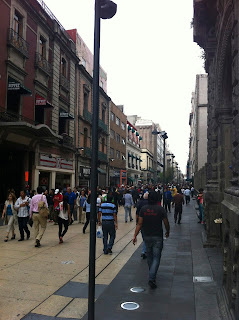 I caught the train one stop, transferred, and went a few more to one called Hidalgo. The signs were clear there, and I'd scoped the area out on Street View last night, so I was able to easily find my hotel but looking for a huge golden sculpture, which was right next to a Starbucks. But as it turns out, everything in Mexico City is next to a Starbucks.

The hotel I'd picked off of my bank points website was, oddly, Hotel New York. The other one I'd been looking at had been Hotel San Diego, and availability had been the deciding factor. I walked in, and though it was 10:30 AM, the man behind the desk still let me check in. That was good—the place was friendly.

It was a typical budget cheapie of the kind I've stayed in all over the world—aging, clean, old fixtures, bordering on but not quite rundown. The wifi reached my room. I dumped my overnight bag and headed out. I had a mission.

I needed to find a hair colorist. 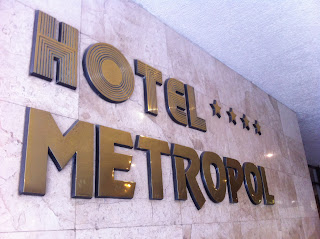 I had my Redken formula on the Notes function of my phone, though my colorist, Paola at Cutler Soho in New York, might use Goldwell now. I'm not sure, Goldwell or Redken. (Either way, she's had the responsibility of fixing my mess over the years and has done an amazing job.) But that didn't matter, I had the Redken formula, and I'd searched for Goldwell in Mexico but had more luck with the Redken site. I had a list of six or seven salons, and decided to check the closest one to my hotel, a place called Misslene.

It was in a shopping mall, and I was a little doubtful at first, but the colorist, Ivanne, did a perfect job. Maybe I wasn't going to end up with horizontal banding from this trip. During MariesWorldTour.com 2001, I had a *lot* of banding to the point where I looked like the core of a tree, but I'd gotten better at choosing salons since then, and carrying my formula helped. Plus, crowd-sourcing helps. I could often find recommendations online. 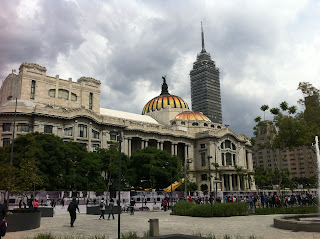 And not just for hair. After I left Misslene and Ivonne (the colorist), I used Foursquare to find recommendations for a lunch spot. This was successful too, and weirdly right across the street from the hotel I'd stayed at in 1992, but I had less success with finding a mani-pedi using Foursquare. I walked around looking at about a dozen nail salons, but in the end, decided not to bother. I'm from the land of the cheap mani-pedi, and it's hard to want to spent $30+ on one I doubt will be as good as the ones at home, but, I figured, if I'm going to spend it, I might as well spend it back in San Miguel where I can maybe meet a few neighbors.

I walked all over the Centro—I had a guy at the Movistar customer service center fix my new SIM. The young woman at the shoe store I'd bought it in back in SMA had set it up wrong, and I had been suspicious, so had sought out customer service here in the big city—then I headed to the neighborhoods of Condesa, Roma, and finally Zona Rosa. My feet were killing me by the time I walked back to my hotel, but lucky for me, my friend had missed his flight, so I didn't have to go out again for dinner. 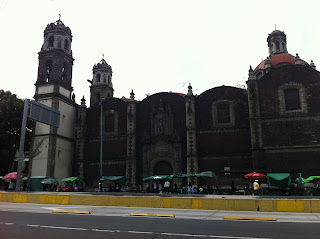 I grabbed a sandwich at a ubiquitous Starbucks on the way back to my room. I wasn't looking for anything good. I was tired, exhausted from my long day of walking around this one tiny part of this massive metropolis.

Maybe the city was just the city, and I didn't necessarily belong to it after all. Or it to me. I belong nowhere and everywhere simultaneously. This much you learn from spending too much time on the road.

But tonight, I belonged asleep in Hotel New York.
Posted by Marie Javins at 10:44 PM