Heading to the Island of the Dolls, Part Two

I got off the pokey light rail, or tren ligero, at the last stop along with most everyone else. Here I was in Xochimilco, embarkation point for the Isla de las Muñecas on the outskirts of Mexico City. The Island of the Dolls. Most specifically, of the decaying, broken dolls. Which sounded both hideous and fascinating, and I wanted to give myself nightmares, so here I was. 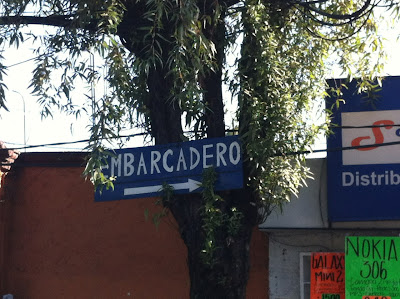 A sign outside the station pointed the way to the dock, or embarcadero. I followed it. After walking a few blocks, I came to a big arch leading to a dock area around a lagoon full of colorful party punts. This wasn't the embarcadero mentioned in Lonely Planet, or even one of the two mentioned on the websites I'd been poring over.

A big sign announced, clearly, the official government rate of 350 pesos (USD 27) an hour. How many hours would this take? Reports varied from two to four.

This isn't going to work, I thought. I could see that already. But here I was, so I started asking around.

Shit. This wasn't going well. At $27 an hour for for hours, this was turning into an exercise in not-a-good-idea-ness. 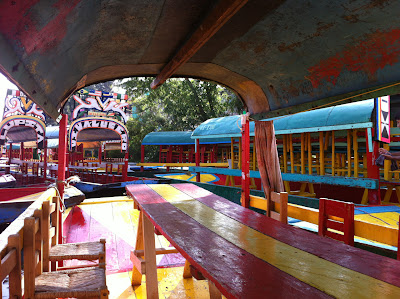 He shrugged a maybe. I walked around the lagoon, looking for a smaller boat.

All the boats were humongous punts for groups. Nothing small.

He motioned me to follow him. We walked across other boats to his boat.  He sat me down and told me to wait while he went to fetch something.

A minute later, the boatman returned with a faded board of photos. He was trying to sell me a tour.

He showed me photos of the canals, of floating mariachis, of all kinds of things I didn't want to see.

"Cuemanco?" I asked. He nodded. That could work, if I went to another embarcadero. He put me on a bus, which slowly wound through town. We passed Embarcadero Fernando Celaya, and I should have jumped off, but I thought the bus was taking me to Embarcadero Cuemanco.

Instead, the bus left me at a turn-off. I walked along for a while, expecting to see it. When it became apparent to me I'd walked for some time, I kept trying to sort out the spot on my map, but -- groan -- stupid iPhone map didn't have Embarcadero Cuemanco on it, and my cell plan included free e-mail and social networking, but not browsing. I couldn't get the Google map.

So I walked and turned and crossed a bridge and landed in a little canalside community. I wandered there for a while, and at some point acknowledged to myself that not only was I lost, but I really needed to head back to Mexico City for the comic convention I was here for, if I wanted to get there before it was time for my homeward-bound bus. 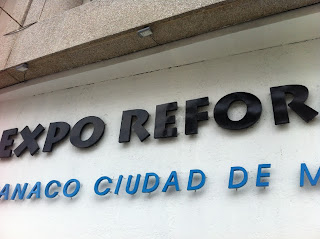 Now my iPhone map was useful, as I found my way back to the main road. I hailed a taxi.

"Embarcadero Fernando Celaya, por favor," I said. I figured I might as well check while I was here, and that dock was walking distance from the tren ligero.

The taxi took me back to town and dropped me at the pier. I asked the boatmen there about the time to Isla de las Muñecas.

One held up four fingers. 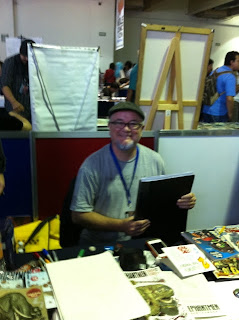 I sighed. Maybe that was right. It was time to give up.

We both laughed then. Richard has been along for the Marie-wanders-around ride all along, having provided the web site for the 2001 MariesWorldTour.com. He's right. I don't give up.

But today I had.

But I'd be back. Too stubborn to accept the "four hours from Cuemanco" assessment, I'm pretty sure I'll give it another try before I leave Mexico.
Posted by Marie Javins at 1:24 PM

Very interesting, Marie. I enjoy ALL of your blogs, and Lynn and I comment on how we live our lives vicariously through you. ENJOYABLE, Young Lady