When I scrolled past the day's posts on Facebook on Monday night, I spotted this on my feed, posted by my old comic book pal Richard Starkings: 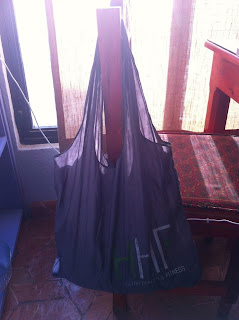 Comic con is over I would like to sleep for a week... Oh? I'm going to Mexico City on Thursday?

Wha--? Hang on a minute. I asked him what was up...turned out there's a comic book convention in Mexico City and he was a guest this year.

I asked a few questions, then went to the Primera Plus site and booked myself a roundtrip ticket, and snagged a free night off my bank account loyalty account.

Then I realized I had forgotten to pack a collapsible spare bag or even a daypack. My overnight luggage ended up being pretty ghetto.

But no matter. I wasn't going to Mexico City to impress people with my overnight bag.

I had a hard time getting to sleep at nine o'clock the night before. But somehow, I got out of bed at 4:30 AM and managed to get out of the house a little over an hour later.

The streets of San Miguel are eerily silent at that time of the morning. A taxi drove past me slowly. I was heading down to the bus stop, but after wondering for a minute what time the local buses started running, I hailed him. 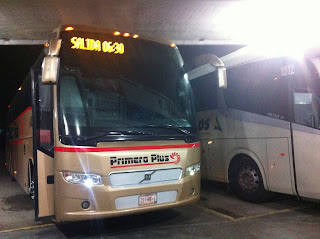 Good thing, too. As we turned onto Mesones and passed the bus stops, I saw not a bus in sight.

We drove the mile or two out of town to the bus station, where I showed the PDF with the ticket number on my phone, and was given two tickets in exchange. One for the way out at 6:30 AM, and one for the way back at 5:40 PM tomorrow.

Boarding the bus was easy—there were only a few buses leaving at that time of morning. A well-coiffed attendant handed the six of us boarding so early small plastic bags containing snacks and our choice of beverages. 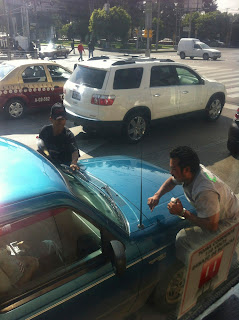 "Agua," I said, pointing to the bottled water. She slipped a water into the bag. On the bus, I took a look at my treats. A processed snack of jalapeno and ham in between a sweet roll. Yuck, no thanks. Some cookies with strawberry jam. I was hungry enough to eat that a few hours later. And the water.

The bus internet didn't work, and I couldn't find the power outlet, but that's okay, I was asleep by the time we hit the outskirts of town.

I woke up with the sun, just in time to hit traffic on the outskirts of Mexico City some three hours later. But that's okay, because if I'd stayed asleep during the approach, I'd have missed learning that Mexico City is still full of squeegee men (and women), that particularly irritating thing we used to have in New York where your car windshield is assaulted for tip money.

There are a few things I don't miss about old New York. That's one of them.