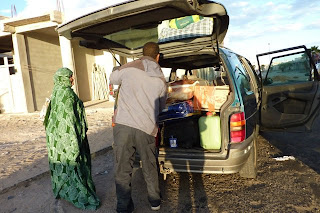 I was at the Hotel Sahara at 7:30. But there was no car in front. I walked up the stairs and surprised the guy at the front desk.

He nodded. A minute later, I heard a horn.

I looked out. There was the early nineties Renault mini-van I'd seen the night before. But the man in the gallibya and head wrap thing was gone. This guy wore trousers, a gray hooded coat, and a shirt that buttoned down the front. And he was packing stuff into the vehicle. Including...was that a 32" flatscreen TV box he was piling into the back?

"Let me see." The front desk clerk looked out the window. He smiled and waved at the man in trousers.


I descended to the street, where the driver, Bamba (I think), took my bag and stuffed it in the back. He was really struggling with that television. It just didn't want to fit.

The only other passengers at the moment were a tall dark man in a blue gallibya and black turban-y thing...a Tuareg, maybe, though I'm not sure how you can tell a Tuareg by sight...and a chubby woman draped in bright green-and-white cloth. She smiled at me from under her headscarf.

As we waited for the packing to finish, a stranger approached me to sing the praises of his hotel.

"For when you come back."

"Does your hotel have wi-fi?"

I hoped he was right. Right now, I wasn't all that impressed with the best driver's packing skills.

The TV still wasn't working out, so all the luggage came back out of the vehicle. Bamba and the maybe-Tuareg and the wi-fi guy had a discussion, then piled a bunch of stuff up on the roof and tied it down. The television was now in the back and my bag was on the roof.

Shit. I hadn't counted on my backpack going through the Sahara on the roof. My bag would get filthy. This wouldn't have happened on the bus.

Two more passengers showed up. These were young guys, mid-twenties, in cool jeans and fashionable T-shirts and belts. They wore nice sneakers too. One was from Mauritania and the other from Senegal. They each carried a small overnight bag. Later, they'd explain to me that they were working under-the-table in Morocco—one in Agadir and one in Marrakesh. They were both on visa runs, going to Mauritania overnight so they could renew their tourist visas when they returned to Morocco the next day.

"It's a little hard to explain..." the Senegalese one had begun.

Of course, I'd gone to Sharm El-Shiekh, not some shitty Saharan border town on the Mauritanian side. But in principal, we'd done the same thing.

We started at about 7:50 a.m.. Bamba motioned me into the passenger seat, directed the three tall men into the smallest seat in the back, and the plump woman into the middle seat. I tried the seatbelt. The receptacle didn't work. Bamba turned the key in the ignition, then looped his seatbelt over himself, without worry about trying to plug it in anywhere. That can't possibly work at all, I thought, and then followed suit. Not like I had a lot of choice.

We drove a few blocks into the back streets of Dakhla, then stopped on a dusty block. Bamba honked the Renault's horn, a few quick taps.

Two more short, plump, cloth-swaddled women emerged from a doorway. More rearranging occurred. The women plopped down into the middle seat with the other woman.

Bamba lit a cigarette. SHIT, I forgot about cigarettes. I mean, totally forgot. They just aren't in my world anymore. Another home run for the bus.

We drove ten minutes north. Dakhla is on a peninsula and we had to drive north to U-turn and head south. We pulled off the road near the police checkpoint and Bamba cut the engine. Four men sat on the ground in the shade of a truck. Drivers waiting on some kind of police procedure?

Bamba spoke sharply to the the four men in Arabic. One of them slowly rose to his feet, then a second. Bamba, the maybe-Tuareg, and the two truck drivers proceeded to remove all baggage from the Renault and start to pack again.

"Good god," I thought. "We're going to get a bait-and-switch. They're going to put us in a tiny Peugeot." I was thinking about the time that had happened to me and Yancey in Jordan, when we'd agreed to private transport in a shiny new SUV and then been traded down to a Peugeot wagon with five Egyptians and a driver.

But no. Bamba just wanted help packing the roof. The men struggled to pack it properly, and then one of the men who had remained sitting snarled in disgust. He seemed to be the expert on these things, and they all deferred to him. He stood up and starting barking orders and tying knots.

"My bag is going to fly off the roof in the middle of the desert," I thought. And of course the problem with having second thoughts in this sort of situation is that there isn't a helluva lot that you can do about it.

Finally, the packing was finished to the satisfaction of the barking-orders man. We could proceed.

And proceed we did, at least 50 feet to the police point. I pulled out one of my fiches, my printed out travel details that I handed out like candy to trick-or-treating policment.

The policeman sternly took my fiche, glanced at it, and then his eyes lit up. He looked in the window at me, laughing.

"The 99 comic book!" It was my pal from a few days ago, at work again. He waved us on and we drove out of Dakhla. 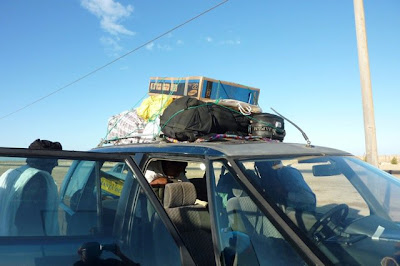 I love that the hotel owner understood wife instead of wi-fi - talk about a Freudian slip! But even better that The 99 can give you street cred throughout your trip.