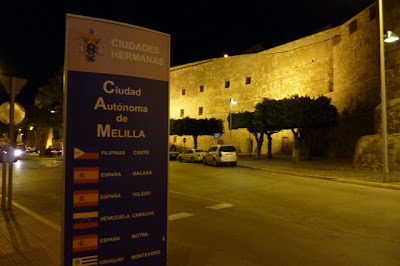 I felt a tiny jolt of excitement as my ferry pulled into the port of Melilla. A crowd of women in headscarves buzzed about the exit door, anxious to disembark after eight stir-crazy hours on the Mediterranean.

I was jetlagged and exhausted, but this was significant. Setting foot onto the African continent, even the Spanish part, meant that my trip had started. (It also means I'm really far behind on designing my MariesWorldTour.com site, but one thing at a time.) And Melilla was new to me! I'd never been to a Spanish enclave on the African continent before.

Following the crowd onto the gangplank, into the ferry terminal, and down an escalator, I soon found myself in front of the old city walls.

The road alongside them curved along and led me to my hotel. I'd booked somewhere decent, knowing I'd still be playing catch-up on the wi-fi in my room.

I checked in and got a room number. #328. The hotel room stunk of old sewers. I don't know if you know what that means but it's common in old cities that never quite updated their plumbing. The bathroom had new tiles, and the floor was covered in fake wood veneer, but Hotel Anfora shows it age. I wrinkled my nose a little. I don't mind this in a cheap room. But a 45 euro a night room?

It could have redeemed itself if the internet had worked. I noticed that the signal was locked, so I traipsed back to the elevator and down to reception for a password. Back upstairs. The signal was one bar. I couldn't get on. Back down to reception. I got a new room, where the signal would work better. Okay, now we're getting somewhere. I got off the elevator on the third floor and had to laugh. The room was about five doors down from the old room. Needless to say, this scheme did not work.

Never mind. I was hungry. I threw the laptop in my bag and rushed out to find dinner. It was 10:30 p.m. but people eat late in Spain.

In short order I learned that Melilla was and wasn't Spain. Almost no restaurants were open. How could this be? In fact, almost nothing is open. Why, it's against the Spanish constitution!

After rushing around searching for a cafe (I foolishly hoped for one with wi-fi), I went back to my hotel and caught the elevator upstairs to the restaurant.

The waiter told me (I think--my Spanish is pretty limited) that the restaurant closed in 15 minutes. My voice cracked as I said "So I can't get food?" It had been a long day.

I didn't know what kind of sandwich but I didn't care. Then, just to see if it would work, I pulled out my laptop.

Moments later I was downloading my email while munching a toasted ham-and-cheese sandwich with fries.

Melilla could have a second chance. Manana.
Posted by Marie Javins at 3:30 PM