In the end, I lazed around an extra day in Essaouira. There wasn't much in the way of formal sights. I wandered the ancient medina, walked around the city walls, visited the fish market,

bought fresh-squeezed orange juice, and sipped coffee at a little coffee shop beneath the ramparts. My riad was cozy and comfortable. My laundry came back stiff and not particularly clean, reminding me that I needed to start doing my own laundry in the sink. My search for a manicure and the
rumored 200 dirham unlimited data SIM led me outside the medina and into the buzzing modern city which was, with its open storefronts, streetside kebab vendors, and small businesses, a good deal easier to comprehend than the ancient chaotic city of tiny rambling alleyways.

I chose the post office at the center of the medina for mailing home my souvenirs I'd picked up in Marrakesh, thinking they were used to tourists sending home silly crap. They were, and the clerk zealously ushered me through the process, barking orders at a subordinate who was charged with putting my package together. Easy.

One afternoon I wandered down to the pier where the fishermen bring in their catch. I paid 10 dirham to climb up onto a preserved city wall, where I had the view of the Atlantic on one side, and could surreptitiously snap shots of fishermen on the other. My reward was a seagull shitting on my head, so I did get punished for my attempt at photos-without-asking.

"How do you get the spice to make that shape?" I have long wondered how this is possible.

"Magic," he whispered. Then laughed and showed me that the pyramids of spice were window dressing, made of glue and some stuffing covered in spices.

I stayed an extra day in Essaouira, because I was still wrangling the new banking system for the job I just left, and trying to figure out how to pay freelancers remotely, and still processing

pages for comic books. And because I'm a little lazy, and I doubted I'd see such a comfortable 20 euro a night hotel again for a long, long time.
And in the end, I bought a coach ticket for Essaouira-Agadir, then connecting Agadir-Dakhla, the southernmost major city before striking out into the desert en route to Mauritania. I'd be traveling for over 24 hours. HELL. But I thought I'd just get it over

with instead of breaking it up into shorter legs.

I arrived early at the Supratours bus terminal, where I was able to leave my bag for 5 dirham. And I went to the nearby coffee shop and turned on my Kindle's wireless, and this week's New Yorker magically appeared on my Kindle. 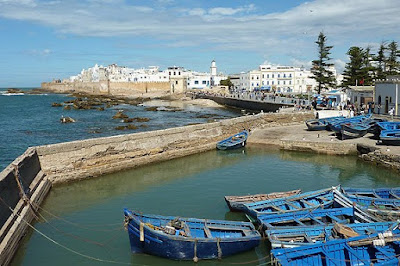 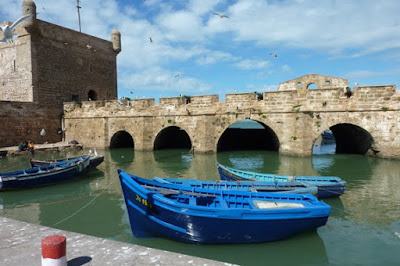 So you're still employed and will be working while traveling? That is amazing! I'm really enjoying reading your posts.