Four days of tartine in a row. Gah.

Tartine is like toast, but it's baguette bread, not sliced bread. I'm not a big bread-eater, but it's all that's keeping me going these days. Every day, I get tartine and cafe au lait (lots of lait, unfortunately) for breakfast. Ever since I hit the Africa continent, it's been bread, bread, bread for petit dejeuner.

This is not all over Africa, of course, This is purely a French influence thing. I'm pretty damn sick of bread. Though I must thank the French, as at least the bread is, without fail, delicious. And the coffee is generally decent. I didn't bother carrying my own coffee works this time, just put some little packets of instant into my pack. The Nescafe guys were handing out free samples on the street one day, and my tenant gave me a Starbucks sample, so I have at least eight days worth of potential caffeine in my pack.


I choked down my morning tartine and cafe au lait on the morning of Tuesday, March 8th, on the rooftop terrace of Le Grand Large riad in Essaouira. Lovely scenery, though the help has to shoo away seagulls once in a while. The weather was a little chilly unless I sat in direct sunlight, and I hate direct sunlight, so I wore my fleece to breakfast.

Back in my room, I packed and re-packed, forgetting a puzzle piece each time. I'm not overburdened, but I am still carry a few zippered packs of random stuff I haven't gone through yet. I have established that neither pack holds my watch, which certainly is en route to New York. So it's good I went to the trouble to get a new band and rehabilitate my 2001 watch. It'll look great in Michael Kraiger's office desk drawer, where it will sit until December.

Today was going to be a doozy. Rather, tonight would be the doozy. I'd booked an overnight bus to the southernmost city in Morocco, Dakhla. Which might actually be in Western Sahara. I suppose it depends on who you ask.

I trudged over to the Supratours bus terminal for the 2:30 afternoon bus to Agadir. This was half-empty, which meant I got two seats to myself. The road wound sickeningly along the coast, up and down some mountainous roads. I thought I might vomit, and looked around for some type of bag, but fortunately the journey ended three hours later, where I changed buses to head south.

I did vomit the next evening in Dakhla. The overnight bus took 20 hours, involved about eight or nine police checks, and a sold-out bus. The passengers liked to toss litter on the ground at any opportunity. And in the bus. The guy next to me threw his ABC gum right on the floor where he sat. I handed out what they call "fiches" to the policemen. These were little coupons of my details, my passport number, my profession. I'd read to be prepared for this on overland websites. It sped the process up when people didn't have to fill out forms at each checkpoint.

The first rest stop was fine, but after that they got seriously skanky. I didn't eat anything after some cashews at 10 p.m., and I drank only sips of water for fear of having to utilize some rancid hole in the ground. I regretted not doing the trip over two days, stopping in Laayoune, but I'd thought it best to just get the hell over with.

In Dakhla, I checked into a swank hotel. That's an overstatement--the Sahara Regency is one of those hotels that can only be considered swank if you've just gotten off a 20-hour bus journey through the desert. It would be a suitable two-star at home. Which hit the spot given my headache, queasy gut, and dehydrated state.

I saw a pharmacist, conveyed my illness in half-assed French, had a long chat in German with a Moroccan man who said I was having an "abenteur" (adventure), and drank an orange juice in hopes of rehydrating. I started eating at my hotel, got through about three spoonfuls of soup, and proceeded to just make it to the ladies room sink where I vomited three times.

I went to sleep in my two-star bed. Better luck tomorrow, when I'd awaken with the call to prayer. And see how the morning tartine agreed with me. 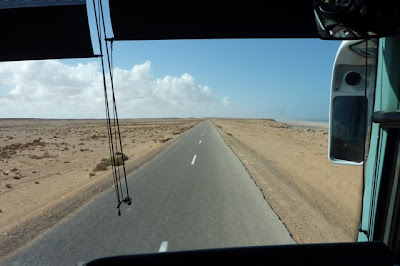 Do you carry oral rehydration salts with you? They can be fairly awful but are useful if you are dehydrated.

Also, when you get to Mali, you should be able to find hard-boiled eggs in the markets if you are sick of bread for breakfast. Burkina Faso has luxuries like yogurt (sweetened, alas) and croissants (and brewed coffee, not just Nescafe). In Benin, I was once offered fish for breakfast (I had asked hopefully for "petit dejeuner" and also tried "du pane") but was not dumb enough to accept.

You were a big inspiration for my RTW trip years ago - Vagabonding.com. I stole your "donate to my site and I'll send you a souvenir" idea wholesale. It did gangbusters.

Just want to let you know that I'm following your new adventure every step of the way and rooting for you from Chicago.

Miriam, I do carry those dehydration salts. I drank a glass full of them in Dakhla. YUCK. They really are vile. But if they work, who am I to argue with them?

Can't wait for yogurt and fresh coffee. I'm in an Italian hotel in Gambia, and I thought they'd have real coffee, but I overlooked the British clientele. So...it's Nescafe.

Mike, thanks! I love the souvenir program. I want to get my site up and running in the next few days and include that. Though I think I have to charge more than fifty bucks this time out.