My dehydration-illness had vanished in the night, and I approached my morning dose of bread and coffee with enthusiasm, then typed away for several hours in the part of the lobby that the hotel wi-fi reached.

I was working on a new invoice-and-pay system for the job I'd just left. I had been the check signer, and there wasn't anyone else to do it, so I had spent a lot of time gathering up info and sorting out a digital system. It was working out well but taking a lot of time as I made various screw-ups along the way of instituting the new set-up.

Fortunately, I had nothing else to do in Dakhla, which is a dusty Saharan town seemingly at the end of the world. My only real mission was finding onward transport. Not so long ago, tourists were required to travel by military convoy to the border of Mauritania, then recently it was done by private hire, and now, rumor had it that you could just catch a daily CTM bus.

After carefully copying down the French I needed from Google Translate, I walked to the CTM office in early afternoon to inquire about this rumor.

Yes, there is a daily CTM bus from Dakhla to the border. It leaves at 9 a.m. It had been running every day for about two or three months now. It's 160 dirham.


"Does the bus go past the border?"

"How do we get across No Man's Land?" I'd read that there were at least two kilometers of nothing in between the border post.

Ah, share taxis waited at the border. That seemed reasonable.

Delighted with this tidbit of information, I walked over to the Hotel Sahara to check on the private transport rates. All the guidebooks listed Hotel Sahara (which is a budget hotel, not the place I was staying) as the place to get a lift to Mauritania.

Hesitantly, I climbed the steps to the budget lodge. The place was full of men, several of them soldiers. I would have been uncomfortable staying there.

I approached the man at reception, who told me his name and said that a ride to Mauritania was 300 dirhams. He suggested I come back at 7, and said he'd check on a driver. I considered a moment, then decided not to pretend I didn't know about the new bus option.

"But what is the advantage of the car over the CTM bus?"

He didn't miss a beat.

"You don't know that driver. What will happen if something goes wrong? Me, I know this driver of the car. So you can trust him."

"But what if I wait until 7, the driver doesn't go tomorrow, and then the bus is sold out?"

"Are you in a hurry? Why leave tomorrow?"

I walked slowly back to the Regency. I ran into the German-speaking Moroccan guy, who fervently extolled the virtues of CTM in German.

"CTM hat zwei drivers. One sleeps and one drives. Und CTM hat die..." He made a circular motion on an air-dashboard. "Tachy..."

I nodded. I didn't know the word in English or German, but it was that paper thing that goes in the speedometer to confirm that the driver never speeds. I didn't ask if it was better to go slow. Sometimes you just want a driver to hurry up and get the trip over with.

What to do? The bus is cheap and reliable. The driver...will he even go? What is the advantage of a driver? I knew better than to assume it was comfort. We were leaving the tourist-comfy zone, and this meant cars in all states of disrepair, with overloaded roof racks, and far too many people shoved in together. The bus had the advantage of definitely going and of me having a reasonably comfortable seat.

But crossing a border with a bus meant a really long border crossing. That's a lot of people all converging on the passport-stamp guy at once.

I decided not to decide. I'd got at 7 to Hotel Sahara and see what there was to see.

At 7, a tall man in a blue gallibya, his head wrapped in a giant black cloth so you could only see his eyes, sat in Hotel Sahara.

"This is Bamba, the driver," said the reception man. Or maybe it was Bomba.

I couldn't tell anything about Bamba given that he was swaddled completely. All I could tell was that he was wearing reading glasses.

Yeah, yeah, I thought. The driver didn't look all that fussed about it. I doubted he'd said 350.

"Are there seatbelts?" I asked.

The driver affected a shocked expression.

"What time do we leave?"

Okay, sure. Why not.

Still, I had reservations. I remembered waiting for hours for the private transport in Ethiopia once, then finally giving up, catching a truck, and that's the one that was overloaded and turned over in the middle of the night.

The bus probably is a better bet, I thought.

But I was committed now.

And in the morning, when I finished packing, I realized my passport was missing.

I frantically patted all the spots I thought it might be. I thought back to the last time I'd seen it. At the police checkpoint into town.

"What is your job? What kind of editor? Really? What is the name of your comic book?"

I'd put it back into the passport pouch. How could it be gone when all the money was still there? Why hadn't the thief stolen the money?

Well, that put a damper on today's plans. I got ready to walk over to Hotel Sahara to tell the driver I wasn't going.

Then I laughed. Reception. My hotel receptionist had taken my passport when I'd checked in. I'd never gotten it back.

I collected my passport and walked to the meeting point. On to Mauritania! 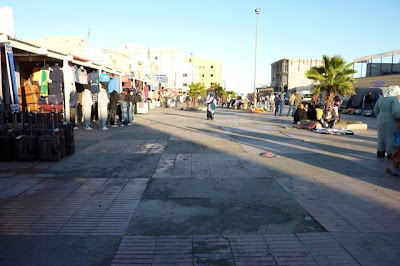