Two guys leapt to their feet in the guard house at Camping Chez Abba. This popular backpacker/overlander place had been sold out when my friend Anne Marie tried to go here some years back, but I'd hit it at a slow time.

They showed me an exhausted hostel type room that had about six beds in it, and an attached "private" squat toilet (if you don't include the giant cracks that showed into the kitchen). But the price was right. I could have the whole room and toilet for $11. The shower block was around the corner. And that's when I realized I was poorly prepared for showing down the hall. I had a mini-towel (quick-drying) and a skimpy nighty.

I didn't think I could shower, though. Towels didn't come with the room and I was reluctant to travel with a wet towel.

The younger man, Musa, offered to help me with anything I needed. He told me where I could catch the "taxi brousse" in the morning (a jitney) and where I could get some pasta for dinner. Then he gave me instructions on how to get to the place of shipwrecks.


At one point, Nouadhibou had an impressive collection of rusting shipwrecks off its coast. "Many of them have been taken by the Chinese for scrap," explained Musa, so I tried not to get my hopes up.

He flagged down a shared taxi for me and off we went. Five minutes later, the driver slowed, stopped, and waved me across the road. "Ships!" He sped off with his remaining passengers.

The number of wrecks were disappointing but atmospheric. I was alone on a beach in Mauritania, after a crazy day of driving among sand and landmines, and I laughed out loud.

"Welcome to Mauritania!" Musa biked over a dune. He'd come to check on me. I was apprehensive, but he walked his bike next to me, and showed me a shortcut back to town. We walked along the railroad tracks of the iron ore train. And on arrival, he took my Moroccan dirham to go and change it for me ("I will get a better rate than you") and he took my passport to get 50 copies made.

"The police are stopping you all the time. Be ready with the copy of the passport."

I worried a bit, as so often this is a ploy for a big tip, but I'd had such good luck with my Bamba, my Mauritanian taxi driver. Maybe Mauritanians were just plain old hospitable.

I headed out for some pasta and then somehow, in the dark, got a taxi to bring me back to Chez Abba. 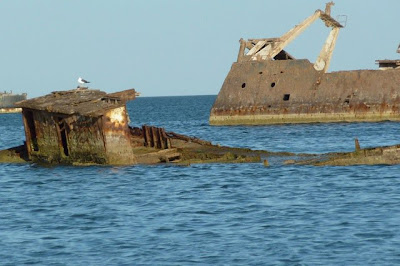 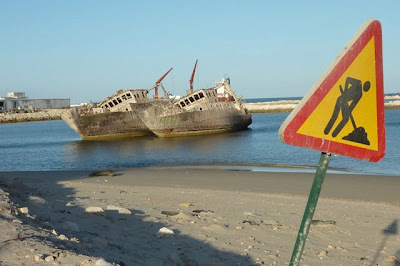