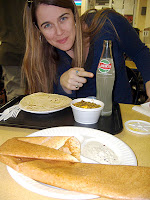 Travel writer Amanda C. (Ax) whizzed through JC last night, en route from Italy to Secaucus to Connecticut to Seattle. We left her newly crippled suitcase at my office in Manhattan and "pod bagged" it to JC with a mere duffel.

I forced her to go to an art opening in the church down the street (Roberta had two paintings on display), on a walk around my neighborhood, for a ride in Henry the Ford Taurus, and finally to my garage. All the highlights of anyone's trip to the New York area.

Finally, we went up to Dosa Street. It's not actually called Dosa Street, but it should be given an honorary street name. There's a block near my mechanic's shop where there seem to be a half-dozen dosa restaurants. A dosa is a South India snack, a crepe filled with spicy potato mash. We ate at Dosa Hut, randomly choosing it from the series of restaurants--Dosa Hut, Dosa House, Dosa Dreams, Dosa Express.

I ordered a mango lassi to accompany my mysore dosa, while Ax ordered a Limca, after musing "What the hell is a Limca?"

She took a sip and her eyes lit up.

"Oh yeah," she said brightly. "Tastes like a lime soda mixed with floor cleanser!"
Posted by Marie Javins at 10:06 PM