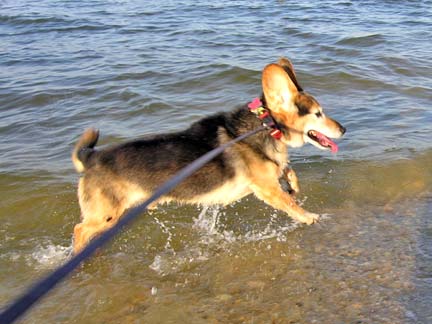 1992 wasn't just about me buying condos, signing trading cards at comic book conventions, and getting on the guest list at Maxwell's.

It was also the year that a good puppy named Guppy was born to my sister's bassett hound-mix. My sister picked him out immediately as the sweetest, most gentle puppy of the litter. She house-trained Guppy and sent him off to live near Washington DC with my mother. There was talk of changing his name to Guthrie when he became older and more dignified. But his name stuck.

Guppy got to travel a lot. He had his own seatbelt in the back of my mother's car, and he'd go to see my sister in rural Virginia or come up to see me in the East Village. He didn't like stairs, so I had to carry him up and down to my third-floor Avenue B apartment, but he loved the Tompkins Square Park Dog Run. The first time we took him there, he immediately was knocked over by another dog. He looked shocked, then jumped up and started running with the rest of the pack.

He was also the first dog I knew who made his own web site. These days, all the dogs are doing it. Cats and hamsters too. (The cartoon no longer works. Browsers of the early 90s were a little different than they are today.)

Guppy died today at the age of 15. He'd been getting weaker and weaker and had been having seizures over the last year. Finally, he couldn't even eat. My mother had to hand-feed him soft foods, because he had no more jaw muscle. He spent his last night in the vet's hospital kennel, but he didn't move. He only slept.

And a beautiful post to honor a great dog.

Viva. How time flies. I still remember him as just a little guppy.