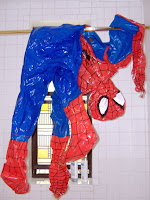 Somehow, in the early nineties, I ended up with a five-and-a-half-foot tall inflatable Spider-Man.

Otis blew Spidey up after the Other Marie and I gave up, our lungs too weak and our interest too minimal. Spidey hung in the window of our Mercer Street (JC) duplex for a few years, watching over indie rockers fresh in from Hoboken, asleep on our living room floor.

"Look, it's Spidey!" I'd hear people call up from the street at night when our apartment lights were on.

Spidey has spent the last twelve years deflated and crushed into the bottom of a box. I unpacked him yesterday and tried to inflate him, but gave up quickly. I put Spidey in the shower to get the dust off him so that he can move to Kuwait or Egypt in a few weeks. The company I work for translates Marvel, Archie, and DC Comics into Arabic and sells them in the Middle East and North Africa. Spidey can be a guest star next time there's an event at Virgin Megastore in Kuwait City or Cairo.
Posted by Marie Javins at 10:27 PM

The adventures u are going through unpacking...makes me almost regret being a person who likes to travel lightly also in life and never keeps hardly anything...u could sell charter trips to your unpacking!

Hey, I still have mine, too! Though it's lived in a kids room and so isn't likely in hte mind condition of a box over all these years.Not suitable for Macys Thanksgiving parade display.

Hey, I have a radioactive nipple left over from the weird blue dye they pump in for the sentinel node biopsy. Does that make me SpiderGirl?
x

Anne-Marie, it's my understanding that radiation treatments and chemotherapy can enhance certain innate talents and skills. I don't think you'll be Spider-Girl, but what else are you good at? You can expect to develop powers such as flight, invisibility, or perhaps you'll turn into a blue creature, like a Smurf but thinner.

Of course, you can unSmurf with a quick change in a nearby phone booth or ladies toilet.

Evalinn, I didn't think I had so much stuff. And yet.

Marcus, did you ever see the giant cat that lives near me? I think he really was in a parade.