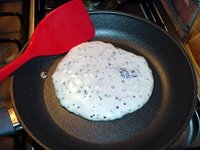 Forgive my wince-inducing use of "Berry" in my titles. I briefly edited "Strawberry Shortcake" last year when I temped at Scholastic. Old habits die hard.

I had mulberry pancakes for breakfast this morning. The results were mixed, but good enough that I am going to force my next houseguest to eat some. (That'll be comic book artist John McCrea, en route from the UK to Garth's in NYC and then to San Diego Comic Con. Though as he's a vegetarian, I won't force the bacon side dish on him.)

I didn't catch on immediately that I needed to not just pluck off the stems, but scrape the berry part off the core in the middle. Presumably there's an easier way to do this. What's the secret? Do I boil them? (Hmm... added bonus, no danger of fruit flies.)

Since I was only cooking for myself, I didn't bother making the pancakes from scratch. Just pulled out the old "Aunt Jemima" mix, and added some buttermilk for taste.

The berries themselves had a nice zing to them, and I didn't even taste any JC toxic waste that no doubt feeds the mulberry tree's roots. (Do vegetarians eat chromium?)

But I don't like seedy berries, and there are seeds in mulberries. 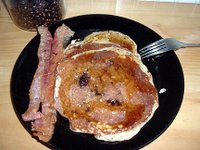 Not sure I'd go out of my way for mulberry pancakes. (Not that going into the backyard is out of the way.) And I'm certainly not willing to eat all the mulberries that fall down into my backyard--that would be a lot of pancakes. So yeah, the results were mixed.

Still, I'm not hallucinating or sick yet (unless you count the queasy feeling one gets after Too Much Coffee © following a night of restless non-sleep), so it worked out. The only down side is that there was no one to share my small triumph over the tree with, as the other condos in my building have all turned over recently, and the neighbors that I would have shared this victory with--Helen, Mike, Wooly, and Shannon--have all moved on. And the new neighbors would surely think me mad to be crowing about mulberry pancakes.
Posted by Marie Javins at 10:32 AM

It's four hours later and I am still not hallucinating.

I think the pollution that may be at the root of the tree, might be filtered at the berry stage. I would enjoy a mulberry breakfast right about now.

One way to deal with the seeds is a very fine sieve called a chinois, which people use when working with blackberries and other berries which have loads of seeds. The flesh goes through, and the seeds stay behind. Available at your friendly neighborhood restaurant supply or cooking supply store. Pronounced SHEEN-wa, as you no doubt know.

Number of chinois at Linens N Things: 0
A&P: 0
Will try Bed, Bath & Beyond tomorrow before schlepping to a proper kitchen place.

At least I got to see what they look like on Amazon. Those are much more expensive than I expected, but maybe I can improvise with a piece of screen from the basement.

Oh, right, I forgot, you were looking to hallucinate. Well, that ought to help. I understand people with heavy metal poisoning often hallucinate!