That Type of Block 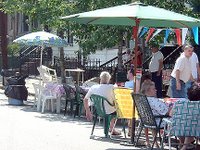 I missed the block party. It was Saturday, when I was stuck in traffic and roasting in the sun.

Once a year my block gets closed off. Everyone makes a dish, people decorate their stoops in July 4th colors, and the lawn chairs come out. It's mostly the old-timers. Terry brings her barbecue, George and his family set up a beach tent, and Camille makes crab cakes. There's usually a DJ and sometimes a karaoke setup, which is funny for the first ten hours, but extremely pesky by about 9 p.m., when copious amounts of beer have been consumed. Old ladies full of personality and spunk (and the most interesting accents) do the Macarena in the middle of the street.

Henry the Ford brought me home via the NJ Turnpike on Sunday night. It stormed for a while--I worried about Henry's cracked steering boot--and then a rainbow stretched from the Verrazzano Bridge to the Pulaski Skyway. Rainbows seem to promise better times ahead, which is a nice fleeting thought until it disappears along with those rosy dreams.

The only evidence of the party was the decorations. The beer bottles and trash are always swept up early the next morning, by the same industrious ladies who did the Macarena into the night. Sweeping, sweeping, always sweeping, except in winter.

And by the fire hydrant in front of my house was an electric typewriter.

"What was the point of that?" I wondered. "That couldn't be from the block party."

It wasn't. In the middle of the night, the typewriter woke me up when it crashed into the middle of the street. I ignored it for a while. I'm good at ignoring city noises from my days on Avenue B, where I partially slept through both a mugging and a mortal drug overdose. I finally got up to check on the source of the crash. The typewriter sat alone in the center of the road, its cord stretching towards Franny's house. Cars ran over it throughout the night.

In the morning, Casey and Fran conferred over the origin of the mysterious typewriter.

"I found it in the street and put it in the trash. Yesterday it was by the fire hydrant, but someone wrapped the cord around the hydrant. Strange, right? And there was a possum right here. I threw water on it, thought it was a cat."

Perhaps there is some relationship between the possum and the typewriter. But more than likely the mystery of the appearing typewriter will rank up there with the dead squirrel found hanging from the utility wires a few weeks ago. "When did that happen and how?"
Posted by Marie Javins at 11:28 AM