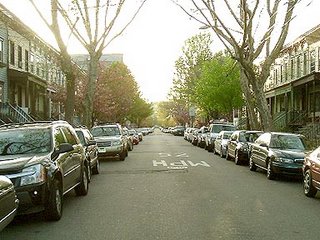 Regular readers probably noticed that my blog changed its name again, as soon as I got back to Jersey City.

Problem is that the previous title, "No Hurry In Africa," actually means something. That's a phrase used to explain many things in Africa. It's kind of like "Inshallah" in Kuwait, though the actual meaning is totally different. It's a catch-all excuse and expression of hopefulness along with an expression of how little control we actually have over events.

"No Hurry In Jersey City" has no meaning. But I'm kind of attached to it. And I don't see Africa in my immediate future. In fact, I don't see anything in my immediate future clearly. I'm a blank 40-year-old slate, with my immediate priorities involving getting comic books out the door and writing some articles. For someone who has had plans involving crisis deadlines for the last 20 years, it's a bit disconcerting. I am getting used to it, just treading water waiting for the book to come out, so that I can be available for publicity.

No hurry though. Plans will evolve with or without me forcing them, Inshallah. I kind of like the name. No Hurry in JC. Maybe I'll keep it.
Posted by Marie Javins at 5:04 PM